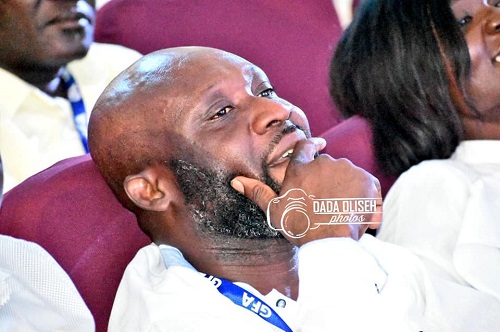 Executive Council member of Ghana Football Asociation, GFA Randy Abbey has made an astonishing revelation with regards to the association's elections which was held in 2019.

On Tuesday, October 25, 2019 history was made as for the first time in 13 years the GFA had a new President as Kurk Okraku succeded Kwesi Nyantakyi.

With no candidates getting the 50% plus one vote it forced for a runoff. Following the rerun, Kurt Okraku pulled 59 votes, George Afriyie and Nana Yaw Amponsah had 43 and 16 votes respectively.

Speaking in the interview with Asempa FM, the bankroller of Hearts of Lions Randy Abbey has revealed how he had to beg George Afriyie to conceded defeat because it was better for him to bow out in grace.

"Looking at the figures of how many votes Kurt Okraku gained in the first round as against George Afriyie, when you look at the trajectory there was no way for George because Fred Pappoe had pulled out and then looking at Kurt's vote, now it was going to be straight between Kurt and George.''

''Kurt needed 4 votes and George needed close to 20 votes, realistically when you analyse there is no way because from the surprise in the first round, in the second round he had gained more votes as compared to George.''

''So those who were urging him to go for the third run, I believed were bourne out of emotions and not that they have analysed it, when it comes to things like this I try to push emotions aside.''

''I went to George Afryie told him to relax and look at the issues that, looking at things he becoming GFA President won't work.''

''I don't think you need to go into this third round, just go out there and tell them you have conceded defeat and walk out in grace.''

''There were a lot of people there, So eventually, I don't know what happened and I knelt down and he told me to stand up and let's go.''

"Then he went up there and conceded defeat."