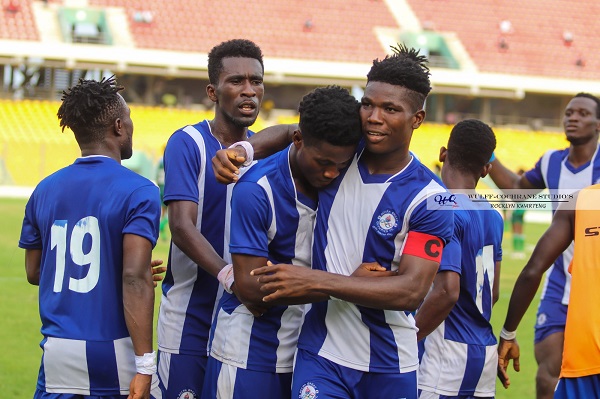 AshantiGold SC will travel to Accra in search of a win against Great Olympics in a Matchday 26 fixture at the Accra Sports stadium today.

The Dade Boys threw away an early goal from Maxwell Abbey Quaye to lose 2-1 to the Bibiani lads at the DUN’s Park. Yahaya Adraman and Prince Opoku Agyemang powered the home side to victory after Great Olympics took the lead in the 22nd minute.

For Great Olympics – a top 4 finish is still within reach with 8 matches left to end the 2021/22 season.

They are 4th on the League log with 39 points – one point behind 3rd placed Aduana Football Club and 13 points behind leaders Asante Kotoko having lost 3, drawn 1 and won 1 in their last five League matches.

AshantiGold SC seems to have discovered their winning formula in recent weeks following a major turnaround leading to three wins, three defeats and one draw compared to four defeats, two wins in their opening six matches of the second round.

The Miners have bagged 32 points after 25 League matches and sit in 11th place on the League log – 4 points away from the bottom clubs. The former League Champions have endured an underwhelming campaign compared to last season’s heroics that led to a Cup final (MTN FA Cup) defeat to Accra Hearts of Oak and an accumulation of 45 points that took them to the 9th place at the end of last season.

The match comes off at the Accra Sports stadium on Saturday, April 23, 2022.