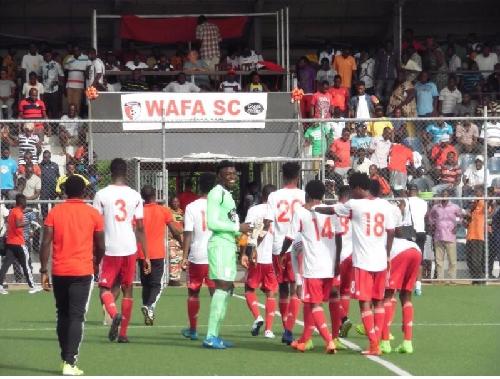 League leaders Asante Kotoko face an uphill task on matchday 27 of the Premier League as they travel to Sogakope as guest of WAFA today, Saturday, April 30, 2022.

The Academy Boys are second from bottom in the League table but their guests are under pressure to end a two match winless run to get their title ambitions on track as they need three wins from the 8 remaining matches to win the League title.

The WAFA Park - once a fortress, has now become a comfortable arena for visiting teams. The Sogakope lads have been underwhelming in the League especially at home following defeats to Karela United, AshantiGold SC and King Faisal.

They have a superior home record against Asante Kotoko as the Porcupine Warriors have yet to win a match at Sogakope - but their current form leaves much to be desired.

The Academy boys have amassed 26 points from 26 matches and sit 17th on the log. A defeat on Saturday will deepen their woes as they badly need the points to save their season.

Kotoko, lead the League table with 52 points - 7 points ahead of second-placed Bechem United but recent results have not gone their way - thus increasing the pressure on Head Coach Prosper Narteh Ogum.

The former Ebusua Dwarfs trainer is heading back to Sogakope for the first time in 9 months - having joined the Reds from the Academy Boys after leading them to a third place finish in the 2020/21 season.

Kotoko has for the first time this season suffered two defeats on the spin following losses to Legon Cities (3-1) at the Baba Yara Stadium and a 2-1 away defeat to Real Tamale United in Tamale on Match Day 25.

The leaders will be without Patrick Asmah (suspended) and Imoro Ibrahim (accumulated yellow cards) leaving Coach Prosper Ogum with some selection headache ahead of the game.

The match is scheduled for the WAFA Park at 3pm on Saturday, April 30, 2022 and live on StarTimes Adepa channel 247.

Still on Saturday, another relegation-threatened side Eleven Wonders will host Accra Great Olympics at the Ohene Ameyaw Park. Both teams suffered defeats on Match Day 26 - and would nee to a quicker return to winning way to salvage their image. Great Olympics lost 1-0 to AshantiGold at home while Wonders also lost to a similar margin to Bibiani Gold Stars at DUN's Park.

The Techiman lads are 16th in the League log with 28 points and are in desperate need of the points to save their season with 8 matches to end the campaign. Eleven points separate the two sides a Great Olympics occupies the 7th spot with 39 points.