GPL: Referee made bad calls because Chelsea fans threatened to give him a 'Wamanafo' treatment - Bashiru Hayford 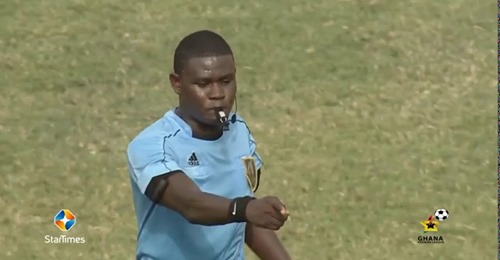 The two sides met in a Week 18 clash at Dormaa on April 4, 2021, because Berekum Chelsea's home ground the Golden City Park was rejected by the club licensing board.

Legon Cities who were trailing 2-1 thought they had equalized in the dying embers when a cross from the left was not dealt with properly with Michael Ampadu's follow up drive going straight into the net but the referee strangely ruled it out for offside.

This left coach Bashiru Hayford livid and during his post-match interview, he revealed that prior to the game the referee was threatened by the home team that he would receive a 'Wamanafo' attack if they do not win.

Berekum Chelsea went on to win the game 2-1 with goals from Bright Amponsah and Stephen Amankona with Legon Cities getting their goal through Hans Kwofie.

"We played so well and we were on top of this game and it a hard defeat to take. In the tunnel, referees were threatened by home fans that if they do not win they will unleash a 'Wamanafo' attack on them and that lead to some bad calls from the referee."

It will be recalled that some referees were assaulted by fans of the home team Wamanafo Mighty Royals FC after a scoreless draw with Bofoakwa Tano FC in a Division One league game on March 28, 2021.

This led to the Executive Council of the Ghana Football Association (GFA) banning the Wamanafo Town park indefinitely.