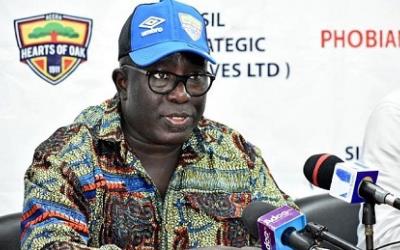 Harry Zakour has thrown his weight behind Hearts of Oak Managing Director in his bid to make the club great again.

The former Hearts of Oak chairman believes Frederick Moore is the best man for the job and has dreams of propelling the club to greater heights.

Speaking on Asempa FM, Zakour, nicknamed 'Millennium Chairman' for the influential role he played in the club’s success story in 2000 called for support Frederick Moore to help him return the club to its glory days.

"The current Hearts Of Oak M.D has dreams for the club and I pray he gets supports from all aspects of the club," he said.

"Everything Frederick Moore has stated with regards to the Pobiman project is achievable."

"There are good people on the board of Hearts Of Oak who are also capable of achieving better things for the club."

Since March there has no football activities in the country due to the Covid-19 pandemic. The various leagues which halted in March have been subsequently cancelled by the Ghana Football Association due to Covid-19.

The football inactivity has led to clubs crying for revenue since their major revenue is from the gate proceeds and Zakour is the latest member to call on government support for the clubs.

According to him, the government should come to the aid of the clubs to mitigate their financial burden.

"Government should support clubs when football returns because of the impact of COVID19 on the game," he added.

Meanwhile, Ghana Football Association (GFA) have announced that the new football season will commence in October, pending approval from government.

In a statement, the country's football governing body said the 2020/21 will start in the second week of October 2020, if they get the green light from government.