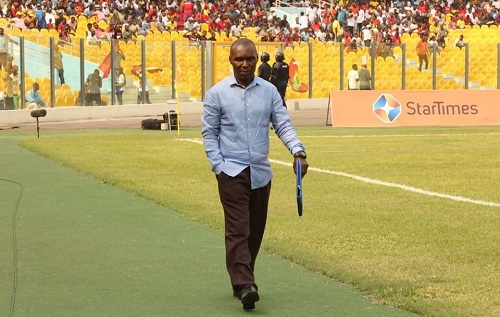 Hearts of Oak coach Edward Nii Odoom has called for calm after their stalemate with Elmina Sharks.

The Phobians failed to take advantage of their home game as they played a 1-1 draw with the visitors.

The visitors took a surprise lead via a corner taken in the fourteenthÂ minute which found Dennis Mensah who fired home from just outside the box.

Elmina Sharks failed to hold their lines asÂ Kofi Kordzi headed home the equalizer for the Phobians from a corner in the 38th minute.Â

After the game, a section of the disappointed fans of Hearts of Oak called for the head of the coach.

Addressing the media, Odoom said heÂ was unhappy with the outcome of the game.

"It is a very bad day, I will plead with the supporters that they should be very patient with us in fact it is a very difficult moment with us."

Sunday's draw meant the Phobians, have recorded a single win in their last five league games, remain glued to 8th position on the log with 17 points.

They next play as guest to Inter Allies at the Accra Sports Stadium.