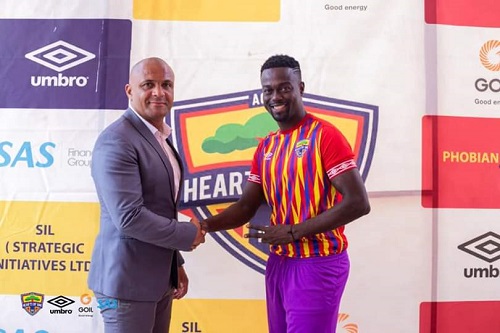 Accra Hearts of Oak head coach, Kim Grant, has revealed the decision behind augmenting his squad with former Karela United midfielder Emmanuel Mintah ahead of the upcoming season.

Speaking in an interview with Accra based Angel FM, the 46-year-old tactician said the defensive midfielder possesses a lot of qualities which can help Hearts of Oak coupled with the fact he was a free agent and a Phobian.

According to Kim Grant, Mintah's performance when they played Karela in the NC league was superb on the day as he marshalled the midfield very well for the Anyinase based club allowing Emmanuel Kayekeh and others to cause havoc.

"He was the one disturbing my system by breaking down attacks and allowing Emmanuel Keyekeh and others get the freedom to operate."

"He is a very technical player, he has a great shot on him, I felt Hearts needed someone who could break down attacks."

Hearts of Oak have confirmed the signing of former Karela United midfielder Emmanuel Mintah for the coming season in September.

Mintah made 13 appearances for Karela United during the GFA Normalisation Committee Special Competition as they lost in the final to Asante Kotoko.

He became the club third signing after Domnic Eshun and Bernard Arthur.