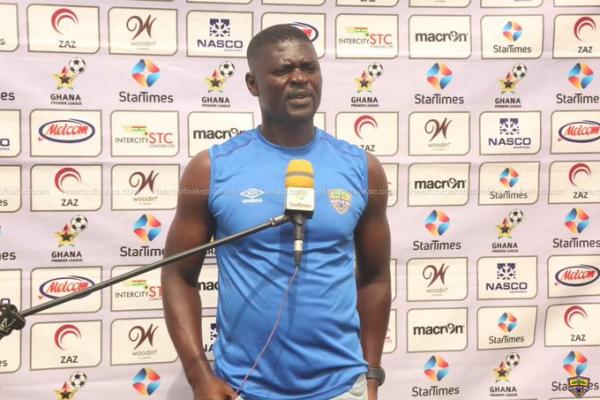 Hearts of Oak coach Samuel Boadu is disappointed by their inability to pick up all three points in their Ghana Premier League clash with Karela United.

The Accra-based side drew against Karela United 1-1 at the Cosby Awauah Memorial Park in Ayinase.

After a barren first half, Karela United took the lead in the 70th minute through Maxwell Boakye - who had come on for Richard Berko. But Hearts of Oak responded after Kwadwo Obeng Jnr soared above everyone else to head in Ibrahim Salifuâ€™s corner kick.

And Samuel Boadu believes his outfit could have picked up the maximum points had they taken their chances in the dying embers of the game.

"Both team played well, we had lots of possession and we held the ball more in the first half. It's unfortunate they scored first from a defensive mistake but we came strongly to cancel their goal, he said at this post-match interview.

"Bringing in Obeng, Sarpong and Mensah was a tactical decision and you see it aided in us equalizing.
We could have finished the game in the last few minutes with two chances but its unfortunate."

Boadu who doubles as the assistant coach of the Black Satellites urged the Phobian fraternity to rally behind the team.

"For our fans, l am asking that they keep supporting and praying for the team, Managment and board members. We will get there."

The draw saw Hearts of Oak moved to third with 34 points while Karela United dropped to fifth with 33 points from 21 matches in the League.