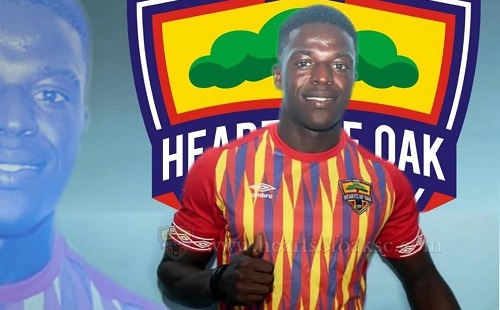 The youngster has revealed that he admires the AC Milan striker and is hoping to make a name like the former Ajax and PSG star.

"Zlatan Ibrahimovic has been someone I looked up to growing up as a player, he is my mentor so I'm praying that I also live up to where he has reached in football," Mensah told Wontumi TV.

Hearts of Oak on Wednesday bolstered their squad with the signing of Isaac Mensah ahead of the 2020/21 Ghana Premier League season.

The striker completed a switch from signing from Division One side Nkoranza Warriors to the Accra-based club.

Mensah put pen-to-paper on a three-year deal to join the Phobians after passing his mandatory medical.

The 2004 Confederation Cup champions on confirmed that they have sealed the capture of the youngster who notched 8 goals for Nkoranza Warriors in the Division League season before the league was called off.

Mensah is expected to add more spice to the attacking department of the Phobians with the likes of Joseph Esso, Kofi Kordzi and Daniel Efriyie available to form a ruthless partnership upfront trailing the next GPL campaign which is likely to kick start in October 2020.