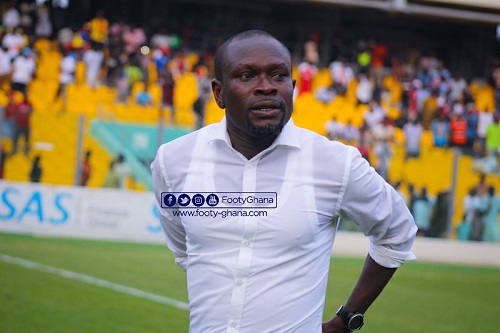 Charles Kwablan Akonnor has shown he still has a soft spot for his former club Asante Kotoko despite the leaving under acrimonious circumstance.

The coach who availed himself to questions on Social media responded to a fan on how he feels about the current state of the Porcupines.

"Coach, how do you feel about Kotoko's current form after you took them to the group stages of the CAFCC last season?

According to ex-Ghana international, he would have done things differently if he was still at the helm of affairs.

"I feel bad, I thought we could have done enough but look the situation now and we hope for the best," Akonnor tweeted.

Akonnor led Asante Kotoko to their first-ever CAF Confederation Cup Group Stage since 2008. He steered the affairs for the Porcupines as they won the Normalisation Committee Special Competition.

He is now the deputy coach for the Black Stars.

Kjetil Zacharissen who was appointed in July as Akonnor's successor failed to replicate the feat the latter in Africa.

Kotoko were booted out of the CAF Champions League by Etoile du Sahel and dropped to the CAF Confederation. But the CAF second-tier competition proved to also too strong for them as Ivorian club San Pedro kicked them out over the weekend.

READ ALSO:  Kotoko : Zachariassen will not return to Ghana because his safety can't be guaranteed - Agent

Goals from Cheick Soumaro and Amede Diomande handed the home side victory in the play-off round second leg fixture to progress on a 2-1 aggregate as the Porcupines have missed a place in the Money Zone.