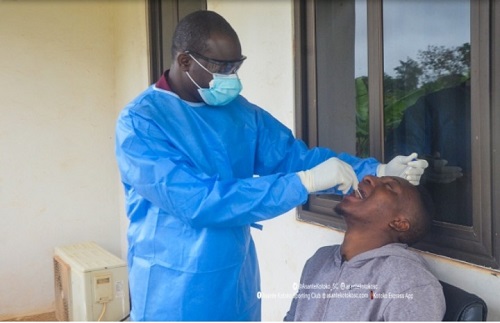 Asante Kotoko players and officials have taken a first step toward returning to the training grounds.

This comes after all the players and technical officials were put through testing for the coronavirus on Tuesday morning.

Competitive football has received the green light to resume following the government's lifting of the ban imposed on it on March 15, 2020.

The medical examination forms part of the club's requirement sanctioned by the government and the Ghana Football Association (GFA) to precede the return to training.

Captain Felix Annan and his teammates were the first to be tested followed by Coach Maxwell Konadu before the administrative staff who operate within the team.

The team will on Wednesday, September 30 commence training ahead of the 2020/21 Ghana Premier League season as well as their participation in the CAF Champions League.

Meanwhile, the GFA has announced that the 2020/2021 season will commence in November.

The nation’s flagship competition, the Ghana Premier League is expected to kick start from Friday, November 13, 2020. While, the Division One League kicks off on December 3, 2020. The Women’s Premier League is set to kick off on January 2, 2021.