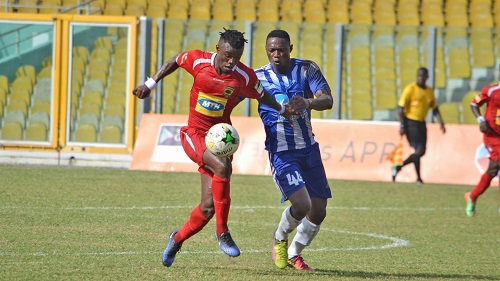 Kumasi Asante Kotoko and Accra Great Olympics are set to engage in a friendly ahead of the start of the Ghana Premier League.

According to Saint Osei, Communications Director for Olympics, the "Wonder Club", will be engaging in a series of friendly ahead of the upcoming domestic top-flight championship with Eleven Wise on Sunday and Asante Kotoko on an unconfirmed date likely to be December 8.

He noted that management of Olympics is not leaving any stone unturned in their bid for the club to stay in the League and also called for fair play and officiating.

At the GFA Extra-Ordinary Congress, 64 of the 120 delegates approved of the decision for Great Olympics and King Faisal to partake in the 2019/20 Ghana Premier League.

Great Olympics over the weekend edge Sekondi Hasaacs at Saint Aquinas park. The Dade Boys had to fight from behind to beat the Sekondi-based team 2-1.

Meanwhile, they have bolstered their attack with the signing of Emmanuel Clottey. Clottey have rejoined the club he won the 2007 Ghana Premier League top scorer at.

The GFA on Wednesday, November 20 announced that the long wait for domestic football is over as the various Leagues will commence on December 21.