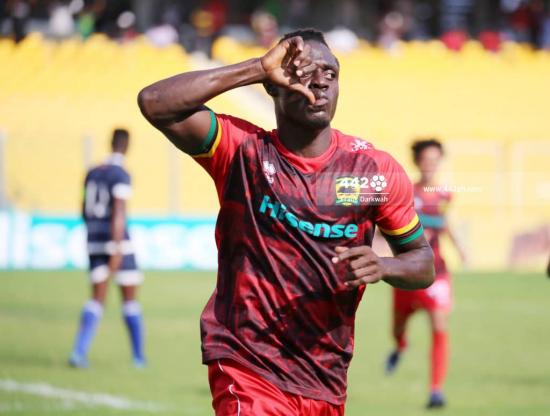 Asante Kotoko striker Kwame Opoku has lifted the lid on the secret to his goalscoring form.

The forward is the Porcupines top scorer in the ongoing 2020/21 Ghana Premier League season. He was on the scoresheet on Sunday as his side picked up a vital away point against WAFA at the Sogakope Red Bull Arena.

His equalizer yesterday, was his six-goal in the 9 matches played.

When asked what he has been doing right that has seen him banging in the goals for Kotoko, the former Nkoranza Warriors forward said hardwork has been key to his incredible run of goalscoring form.

"I will give thanks to God for making it another blissful day for me... I don't joke with my prayers aside that I do train a lot, that is one of the secret's why I keep scoring," he said.

Kwame Opoku on Sunday, scored his sixth goal of the season for Asante Kotoko as the Porcupine Warriors came from a goal down to draw 1-1 at WAFA at the Red Bull arena at Sogakope.

The forward restored parity for Kotoko in the second half after Daniel Lomotey has put and the home side in the 29th minute.

Opoku was teed up by Emmanuel Sarkodie as he striked past goalkeeper Boliver Owusu for the equalizer in the 62nd minute.