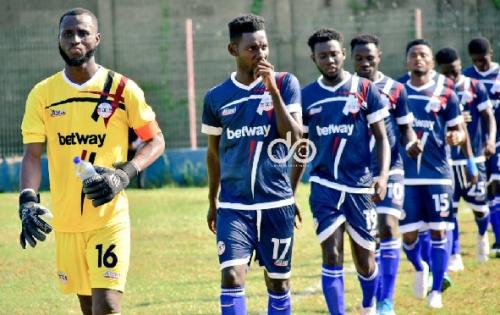 Liberty Professionals put their troubles behind them to beat Elmina Sharks 4-0 on match day 19 of the Ghana Premier League at the Red Bull arena in Sogakope on Saturday.

The Dansoman lads who went into the game with a blemish record of winning only one game in six attempts, this time came out unscathed against Elmina Sharks. The game was played in Sogakope due the revocation of the match venue license of the Carl Reindorf Park by the club Licensing Board.

After a balanced exchange in the opening half of the game, Paul Kwame gave his side the lead inside 36 minutes with towering header. The forward soared above the Elmina Sharks defence to head home the opener against the run of play as Liberty headed into the break with a slim lead.

Back from recess, Liberty Professionals committed men forward in search of the second goal â€“ and their efforts were rewarded 15 minutes into the second half when Simon Appiah scored the second goal in the 60thÂ minute.

Kwaku Karikari converted from the spot for the third goal in the 80thÂ minute â€“ his fifth of the season.

Former Karela United and Asante Kotoko forward William Opoku Mensah was introduced five minutes from time â€“ he wasted no time by registering his name on the scorersâ€™ sheet for the fourth goal for Liberty Professionals.

The defeat is a first for former Ghana star Nii Odartey Lamptey who took over from Yaw Acheampong as coach of Elmina Sharks before the end of the first round. He led Sharks to two victories against Asante Kotoko and Ebusua Dwarfs.

Liberty Professionals are battling against the drop and the win against Sharks will do their confidence a lot of good. They sit in 17thÂ place with 18 points, while Elmina Sharks lie 13thÂ with 23 points.