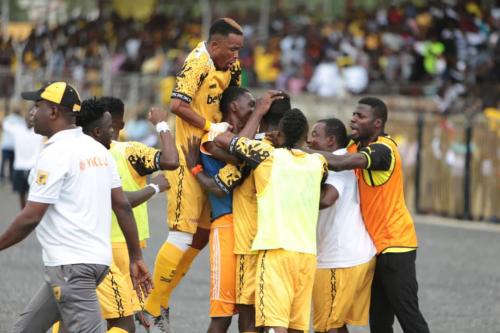 AshantiGold SC scored a late penalty to beat Hearts of Oak 1-0 on match day 19 of the Ghana Premier League at the Obuasi Len Clay stadium on Saturday.

The Miners were lucky to go unpunished in the first half when goalkeeper Kofi Mensah saved Victor Aidoo’s penalty to keep them in the game.

The opening 45 minutes of the game saw both sides miss begging chances including a penalty kick by the Phobians inside 18 minutes.

The referee pointed to the spot following a late tackle on Hearts of Oak winger Patrick Razak by AshantiGold left back Samed Mohammed – But spot kick expert Victor Aidoo missed.

Aidoo hit a lower ball to his right but AshantiGold goalkeeper Kofi Mensah guessed right to make a full grasp of the ball, his second penalty save in seven days. Mensah, who joined on a free in the second window, saved a penalty in Anyinase on Sunday when the Miners drew 1-1 with second placed Karela United FC.

The home side came in strongly after the penalty miss and created their best chance in the 29th minute but Kusi Brookelyn failed to convert as Hearts shot stopper Ben Mensah made a brilliant save.

AshantiGold came in close again in the 76th minute when Amos Nkrumah brilliantly swiveled through the Hearts of Oak defence to pick up David Abagna – But the former Wa All Stars winger shot wide.

The game looked ending in a barren draw until the second minute of added time when the Miners were awarded a penalty. Hearts of Oak captain Fatawu Mohammed was adjudged to have handled the ball in the box and the referee whistled in favour of the home side.

AshantiGold SC captain Amos Addai stepped up and planted the ball into the twine to score the only goal of the game.

The loss for the Phobians is a first in three for Hearts coach Samuel Boadu who took over from Kosta Papic a little over a month ago.

AshantiGold sit in 8th place with 26 points, four points behind Hearts of Oak who are in fourth with 30 points.