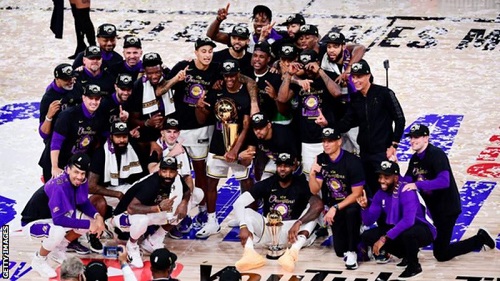 The Los Angeles Lakers ended a decade-long wait for a 17th NBA title as they beat the Miami Heat 106-93 to seal a 4-2 series victory.

Victory ties the Lakers with the Boston Celtics for the most NBA championships.

"It means a lot to represent this franchise," said James.

"I told [Lakers president] Jeanie [Buss] when I came here that I was going to put this franchise back in the position where it belongs.

"And I want my respect too."

From the wilderness to winners 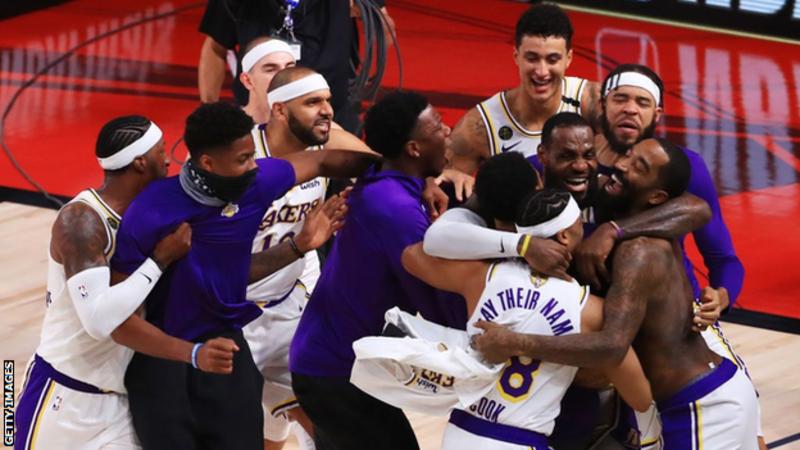 Before this season the Lakers had failed to reach the play-offs for six consecutive years and their long-awaited success comes after a campaign like no other.

The NBA Finals would have been done and dusted in the spring but for the global spread of coronavirus that shut the season down on 11 March, hours after it was declared a pandemic and several players tested positive for the virus.

The season eventually re-started on 31 July, but with no fans courtside. Played behind closed doors at Walt Disney World in Florida, players entered a bio-secure bubble - which the Lakers will now leave after more than 90 days away from friends and family.

The Lakers last won an NBA title in 2010 and the six years they failed to reach the play-offs starkly illustrated their fall from grace.

Change was on its way though, with firing and hiring at management level followed by the blockbuster arrival of James - then a three-time NBA champion - from the Cleveland Cavaliers.

That was followed by the signing of Davis in June 2019, with whom James teamed up in a partnership that just clicked. They led the Lakers to the top of the Western Conference, and ultimately to the very top of the NBA.

James becomes the first player in NBA history to be named Finals MVP with three different teams (Lakers, Cavaliers and Heat). Now with four MVPs to his name, he trails only Michael Jordan, who won six.

"Thinking I have something to prove fuels me," said James. "No matter what I've done in my career up to this point, there's still little rumblings of doubt, comparing me to the history of the game... 'Has he done this, has he done that?'

"Having that in my head, saying to myself why not still have something to prove, I think it fuels me." 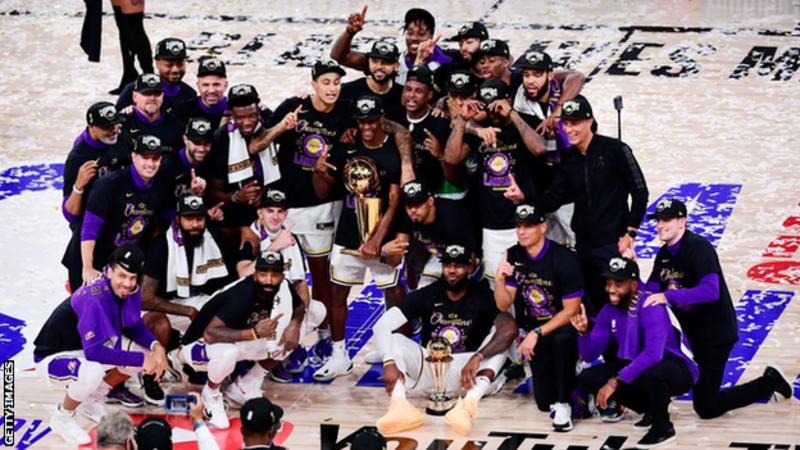 'Kobe's proud of us'

Victory for the Lakers also comes in a year in which they lost one of their greats - Kobe Bryant.

The five-time NBA champion, who spent his entire career with the Lakers and led them to their last NBA title in 2010, was killed in a helicopter crash in January alongside his daughter Gianna.

On several occasions during the play-offs, the Lakers have competed in 'Black Mamba' jerseys - a strip themed on Bryant's self-styled nickname.

Before their defeat in game five of the finals, the Lakers had won all four play-off matches they had contested when wearing the strip, which was co-designed by Bryant and released in 2017.

"Ever since the tragedy, all we wanted is to do it for him, and we didn't let him down," said Davis.

"It would have been great to do it last game in his jerseys, but it made us come down even more aggressive, even more powerful on both ends of the floor, to make sure we close it down tonight.

Lakers president Buss added: "To Lakers nation, we have been through a heartbreaking tragedy with the loss of our beloved Kobe Bryant and Gianna.

"Let this trophy serve as a reminder of when we come together, believe in each other, incredible things can happen."

Bryant's widow Vanessa posted a tribute to the Lakers on her Instagram story with a photo of her late husband with Lakers general manager and vice-president Pelinka.

"Wish Kobe and Gigi were here to see this," she wrote.

'We have to continue to push for better days' 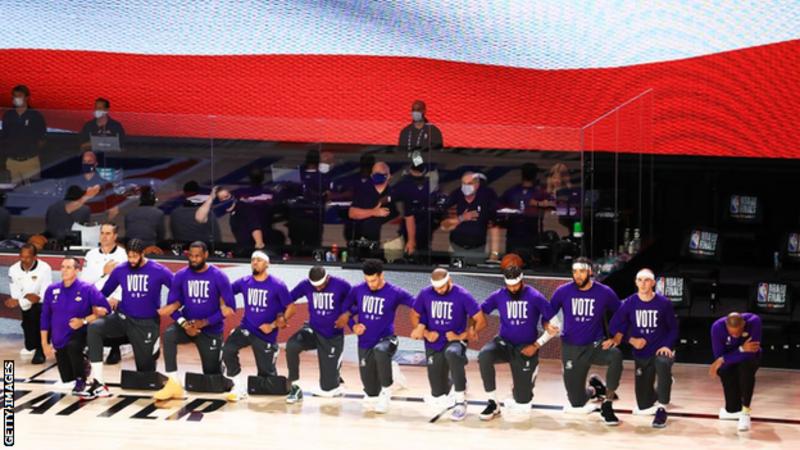 Since its restart the NBA has been at the forefront of the conversation surrounding racial justice issues.

Games were postponed as players and teams protested at the shooting of Jacob Blake in Wisconsin in August, while 'Black Lives Matter' adorned the courts alongside the NBA logo.

Jerseys ordinarily emblazoned with well-known surnames instead carried activist slogans: 'Justice Now', 'See Us', 'Hear Us', 'Respect Us', 'Love Us', or 'Black Lives Matter', 'Say Their Names' and 'I Can't Breathe'.

Players took the knee before every match and, during the finals, did so while wearing T-shirts displaying the word 'vote' - "a league-wide action in support of non-partisan efforts to expand voting access" ahead of the upcoming US elections.

"We all want to see better days and when we leave here, we have to continue to push that," James said.

"If we continue to do that - all of us - America will be a much better place. We all love this country."

LeBron James: "It doesn't matter where it is if you win a championship - a bubble, Miami, Golden State. When you get to this point, it is one of the greatest feelings in the world for a basketball player."

Anthony Davis: "We sacrificed, we trusted one another, we had a will to win. After all of the things we have been through this year, we were able to come into this bubble with one goal, to win the championship. We were able to [leave a legacy] tonight, and now we want to build on it."

Jimmy Butler: "It's hard, because it was special to us. We really enjoyed playing with one another, really enjoyed being around one another. I just appreciate it and am thankful I had the opportunity to be able to do that."

Head coach Erik Spoelstra: "We didn't get the final result that we wanted. But these are going to be lifetime memories that we have together."