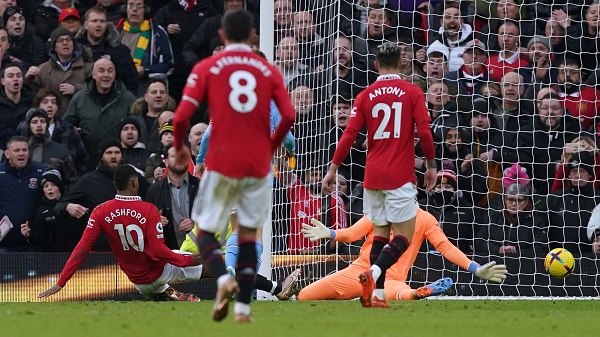 Marcus Rashford kept up his stunning scoring streak to complete an incredible 2-1 comeback win for Manchester United over rivals Manchester City at Old Trafford, denting their neighbours’ Premier League title challenge and perhaps launching one of their own.

City looked set to complete back-to-back derby doubles over United when Jack Grealish stepped off the bench to head the visitors in front (60).

But after a VAR check cleared Rashford from being offside in the build-up to Bruno Fernandes' equaliser (78) - to the fury of City's players - the England man turned in Alejandro Garnacho's cross four minutes later to score for a ninth time in a row on his home ground.

City's 6-3 thrashing of United in October had been a bruising reality check after a four-game Premier League winning streak but Ten Hag's side have developed significantly since those early days and are now up to third in the table, just a point behind their local rivals and six off leaders Arsenal, ahead of the North London derby on Sunday.

It's the second damaging result of the week for Pep Guardiola, with defeat in his 500th top-flight game as a manager coming just days after his side crashed out of the Carabao Cup at Southampton. This had been another below-par performance until Grealish's goal and, with four points dropped from four games since the restart after the World Cup, their match with Tottenham on Thursday looks like another crucial one.

The momentum is certainly with the red half of Manchester now. United have won nine on the spin in all competitions and can close in on Arsenal when they go to the Emirates next weekend, after a trip to Crystal Palace on Wednesday.

How Rashford fired Man Utd to another Old Trafford win...

Guardiola had criticised his side for losing their focus against lesser sides this season, following recent slip-ups to Southampton, Everton and Brentford, but against their arch-rivals on the big stage on Saturday City were again short on sharpness.

Kyle Walker, Joao Cancelo and Manuel Akanji were among the players to give the ball away needlessly early on and jittery City were almost punished when Bernardo Silva misplaced a pass in midfield to spark a United counter which saw Fernandes shoot wide of the far post.

There was more erratic play from Ederson, who came rushing out of his area on 35 minutes only to see Rashford take it round him. Walker rescued his keeper with a block on Rashford's goal-bound shot on that occasion but the in-form forward was through again moments later, this time over-running his drive into the area before prodding a shot against Ederson.

City had almost 69 per cent possession in that first half but failed badly to get the ball to Haaland to test makeshift centre-back Luke Shaw. An ambitious Walker drive from 35 yards which fizzed past the post just before the whistle for the interval was as close as they came.

With new loan signing Wout Weghorst watching on but unavailable to play, Antony came on at half-time for centre forward Anthony Martial, who appeared to pick up a knock, but it was a City change which made the difference.

Phil Foden had been unable to expose under-pressure United right-back Aaron Wan-Bissaka but his replacement had an instant impact. Kevin De Bruyne was superb in the build-up, dribbling into the right channel of the penalty area before standing up an inviting cross for Grealish to nod in.

It was just Grealish's second Premier League goal of the season and fifth of his City career but felt like a vital one - until United's remarkable turnaround.

A Casemiro pass through for Rashford appeared to find the forward in a clear offside position but he didn't touch the ball, despite it being right by his feet, and Fernandes stepped in to curl home from the edge of the box. City were incensed but VAR judged Rashford hadn't touched the ball or impacted the City defence to be offside.

Moments later he had the ball in the net himself for an eighth goal in seven games, converting Garnacho's low cross past Ederson to send the home supporters wild.

They've seen their team win 12 in a row here now in all competitions - and they believe something special is happening to their team.