Manchester United finally on their way back, says Guardiola 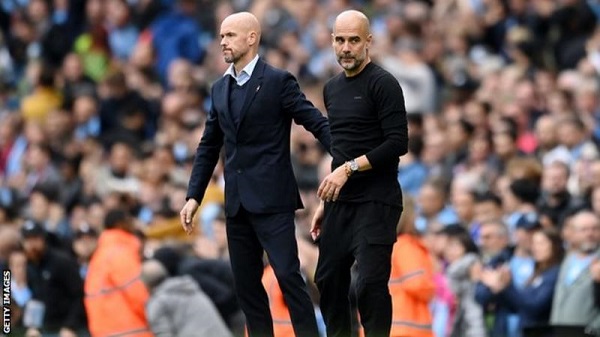 Manchester City manager Pep Guardiola says Manchester United are on their way back to being competitive at the top of the table.

United have not won the Premier League since 2013 and their last trophy came in 2017.

But they are unbeaten in seven matches since a 6-3 defeat by City and Guardiola says he sees positive changes under manager Erik ten Hag.

"I have the feeling United are coming back," said Guardiola.

"Finally United is coming back - I've seen it on Thursday [the 3-0 win over Sheriff Tiraspol], and against Chelsea in the first half [of the 1-1 draw last weekend].

"I said I like what I see of United right now. There will be a lot of teams like United fighting. That's why you have to fight to qualify for the Champions League and fight for the title."

Guardiola also says he sees Newcastle being in the mix this season to challenge for the title and top four.

"Newcastle are already there," added Guardiola, whose City side are seeking a third consecutive Premier League title.

"I saw them against Tottenham. The central defenders went man to man against Kane and Son with no problem at all.

"We played them in the third game of the season. Imagine this team playing one game a week? We know how good Eddie the manager is.

"They have new players. They play brave. They are a contender to be there."

'Too tired for Insta'

Guardiola believes his team don't get enough credit for what are perceived to be easy successes.

Last weekend against Brighton was one such example. City won 3-1, with Erling Haaland scoring twice in what appeared to be a routine win against inferior opposition.

"I saw the players in the locker room after Brighton, they were exhausted," said Guardiola.

"They couldn't even take the phone. Imagine how tired they were - they didn't even have the energy to open Instagram."