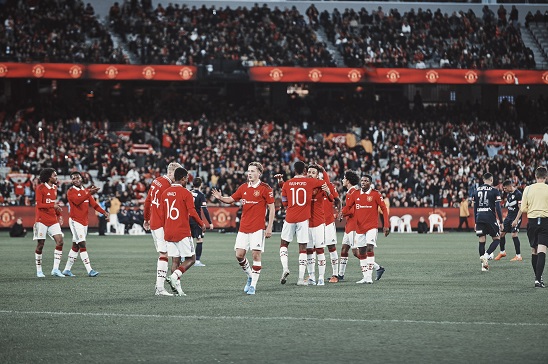 Erik ten Hag maintained his 100 percent start to pre-season as Manchester United came from behind to beat Melbourne Victory 4-1 at the MCG.

United were made to work for victory in the first leg of their tour of Australia, with Chris Ikonomidis rounding off a clinical counter to hand Melbourne a shock fifth-minute lead.

But Scott McTominay's deflected equaliser and Anthony Martial's second pre-season goal in the space of three minutes at the end of the first half saw United turn the game around in an instant.

Ten Hag made 10 half-time alterations but United retained control against a tiring Melbourne, and hit four goals in successive pre-season games thanks to Marcus Rashford's third and a late own goal from Edmond Lupancu.

What's next for Man Utd?

United remain in Melbourne for Tuesday's pre-season friendly against Crystal Palace (11.10am), before travelling to Perth to face Aston Villa on July 23 (10.45am).