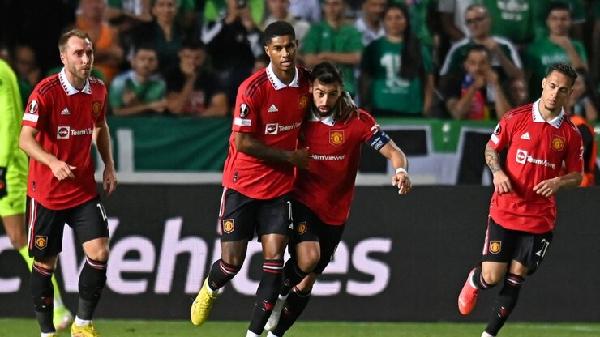 Playing against Cypriot opposition for the first time in their illustrious history, Manchester United were forced to come from behind to win 3-2 against Omonia Nicosia.

Marcus Rashford came off the bench and had a direct hand in all three goals to spare the Red Devils’ blushes in Cyprus.

In his pre-match interview, Neil Lennon said he needed his goalkeeper to have a good game, and up until HT he would’ve had no complaints. Inside the first 10 minutes, Fabiano denied Cristiano Ronaldo, who had found space on the left before driving low towards the bottom corner.

The chances kept coming, as Bruno Fernandes’ lob hit the bar before Antony forced another spectacular save after cutting in from the left, arrowing his effort towards the top corner.

United’s wastefulness would cost them though, as the hosts charged up the other end to sensationally take the lead. In scenes reminiscent of their UEFA Champions League loss to İstanbul Başakşehir two years ago, the visitors left just one man back from a set-piece and were caught on the counter, as Bruno’s exceptional dribble was finished emphatically by Karim Ansarifard.

Erik ten Hag wasted no time in shuffling the pack, introducing Luke Shaw and Rashford at the break. The latter wasted no time making an impact, striking the equaliser within eight minutes of his introduction. Omonia failed to deal with a long ball and Rashford was first to react, brilliantly slotting into the far corner from outside the area.

Momentum was firmly with the visitors now and Anthony Martial wasted no time in putting United ahead. Less than two minutes after coming on, the Frenchman received a flick on from Rashford and produced a clinical finish, snapping his shot in at the near post.

Ultimately, that goal would prove decisive, as a 700th club goal continued to evade Ronaldo, with the Portugese missing a glorious chance to double United’s advantage late on. He would turn provider for United’s third though, as he pulled a shot that was heading wide before being turned home at the back post by Rashford.

Omonia fired straight back though as sloppy play at the back allowed the hosts to steal into the final third, with Andronikos Kakoullis feeding Nikolas Panagiotou to drive beyond David de Gea. To the relief of ten Hag, time would run out for an equaliser, with United keeping themselves in contention to battle Real Socieadad for top spot.

Meanwhile, despite a gallant effort, Omonia have lost all three group games this season, and won just one of their 27 group stage games at this level.