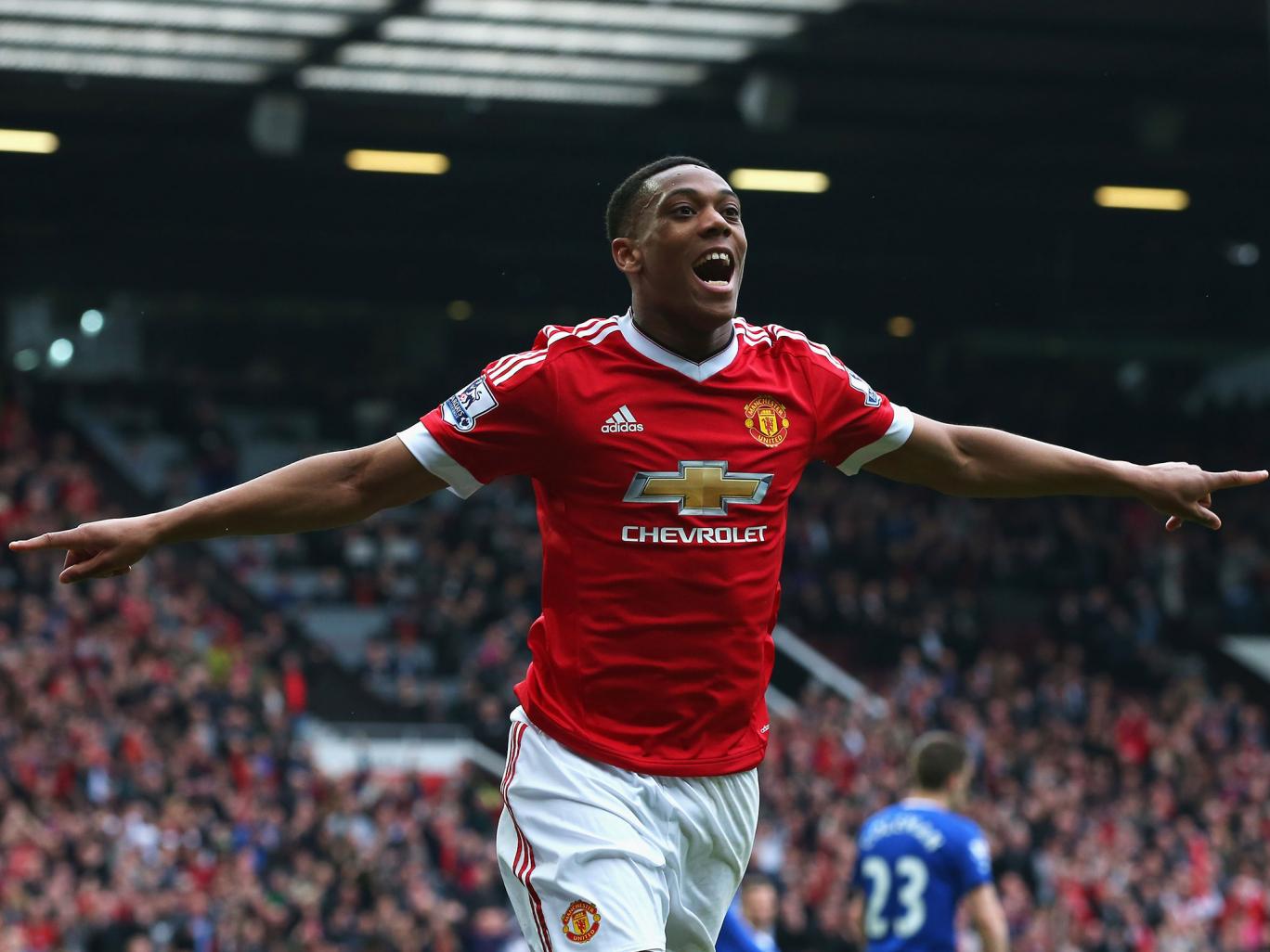 Martial's strike, United's 1000th Premier League goal at Old Trafford, put them just one point behind Manchester City in fourth position and would be remembered as the club honoured Sir Bobby Charlton for his 60-year association with the club.

Following an uneventful first half and a wave of Everton pressure to begin the second period, United became the first team to reach the landmark when Marcus Rashford and substitute Timothy Fosu-Mensah combined to set up Martial's 13th goal for United this season.

The win moves the hosts back within a point of fourth-placed rivals Manchester City, who they beat immediately before the international break, with seven matches remaining for each side.

Everton hit the crossbar through captain Phil Jagielka shortly after Martial's strike but could not avoid a first Premier League defeat on the road since October.

Roberto Martinez's side remain 12th with eight league matches to play and could face United again in the FA Cup semi-final later this month if Van Gaal's men negotiate a quarter-final replay at West Ham.

Before kick-off, United icon Bobby Charlton received a rousing ovation on the field as an in-stadium mosaic marked Old Trafford's South Stand being renamed in his honour.

United were unchanged from their derby win over Manchester City last time out, while the visitors welcomed England defender John Stones back from international duty with a place at centre-back ahead of Ramiro Funes Mori.

Everton winger Gerard Deulofeu â€“ recalled in the visitors' other change - darted menacingly past Marcos Rojo but failed to get a shot off after bursting into the United box.

Both sides attacked willingly in an enterprising start and Martial saw his strike deflected narrowly beyond the far post by Everton full-back Leighton Baines.

David de Gea was out quickly to spare Chris Smalling, who lost his footing to leave reported United target Romelu Lukaku bearing down on goal in a first half which saw neither side produce a shot on target.Â

Fosu-Mensah replaced Rojo at half-time and Matteo Darmian switched to left-back but Deulofeu continued to cause problems down the United left â€“ his low cross to Lukaku prompting a last-ditch intervention from Smalling.

Daley Blind was the next man to bravely deny Lukaku and Smalling blocked from Tom Cleverley, although Everton's pressure would count for nothing when United picked them apart in the 54th minute.

Teenage striker Rashford rolled a backheel into the path of Fosu-Mensah, whose low cross evaded Stones and Seamus Coleman for Martial to drill home through the legs of goalkeeper Joel Robles.

Jagielka thudded a header from Deulofeu's right-wing corner against the bar as Everton sought an immediate response.

United, though, were attacking with increasing confidence by the time Martinez made a surprise call to replace the excellent Deulofeu with Kevin Mirallas.

The change did nothing to shake the impression that Everton had run out of ideas, until the excellent Blind departed through injury to give them late encouragement.