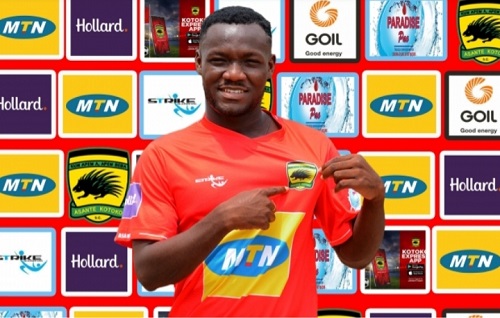 The former Nkoranza Warriors captain on Saturday, penned a 3-year-deal with the Porcupines to become the club's first signing in the just-opened transfer window and the second player to be registered this term following the registration of striker, Kwame Opoku who was signed earlier.

Sarkodie's arrival is expected to boost the midfielder options in Maxwell Konadu's squad as they aim to return to Africa this season.

Emmanuel Sarkodie meanwhile has vowed to repay the faith shown in him by giving his 100 percent for club.

"I was born here in Kumasi and I grew up wishing to play for Kotoko," Sarkodie tells Kotoko Express App. "Coming here is like coming home to where it all started for me as a footballer as I was once a member of the Kotoko Youth Team."

"I am here to do my best to help the club achieve its goals. I believe in hard work and knows that I would not have come this far if I did not push myself. It is the same thing I am going to do here. Discipline and commitment to duty are my hallmarks and I would always give my hundred percent for the shirt and the fans."

Football in the country has been suspended as the nation battles Covid-19.