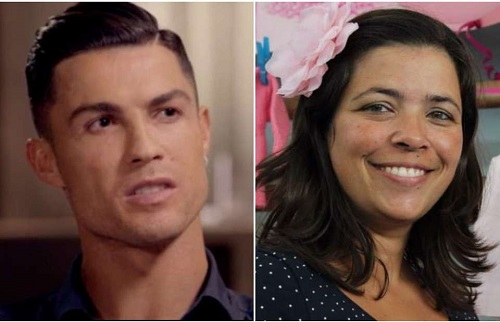 A married mum-of-two has come forward to identify herself as one of the McDonald’s workers who gave Cristiano Ronaldo burgers when he used to beg for food as a child.

The 34-year-old Juventus striker launched an appeal to find the mystery McDonald’s employees including one called Edna during an ITV interview with Piers Morgan.

He recalled how he and other youngsters at his boyhood club Sporting Lisbon would knock on the door of a McDonald’s next to the stadium, and be given food by Edna and “two other girls” he never found again.

The five-time Ballon d’Or winner said he would like to invite the trio to Turin or Lisbon to have dinner with him if they were ever found.

On Thursday, Paula Leca came forward to say she was one of the three women, and would happily accept a dinner invite from the star footballer.

She told Portuguese radio station Renascenca: “They would appear in front of the restaurant and when there were hamburgers left over our manager would give us permission to hand them over.

“One of the boys was Cristiano Ronaldo who was perhaps the most timid of them all. This happened almost every night each week.

“I still laugh about it all now. I had already told my son about it but he thought it was a fib because he couldn’t imagine his mum ever giving Cristiano Ronaldo a hamburger.

“My husband already knew about it, because sometimes he would go to pick me up from work at night and he also saw him.

“It’s funny to go back now to something that happened so long ago. It shows his humility. At least now people know this wasn’t an invention.

“If he invited me out for dinner, I’d go for sure. The first thing I’d do would be to say thank you and during the meal we would have time to remember those times.”

Paula, whose husband is called Jose Costa and told the radio station she had sadly lost contact with her former boss Edna, took to Facebook on Thursday to say: “I’m here thinking about the twists and turns in life.

“I didn’t think Karma existed but I’m beginning to believe now that it does.”