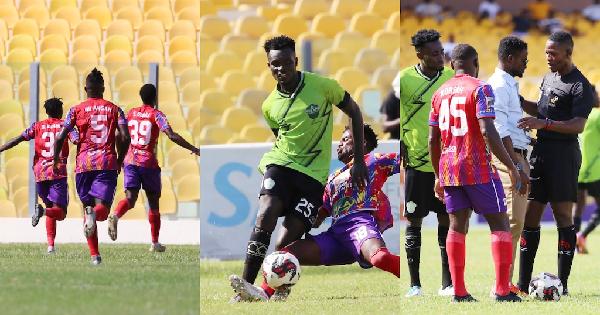 Hearts of Oak's quest to defend the MTN FA Cup is on course after beating Dreams on Saturday.

The defending Champions edge Dreams 3-2 at the Accra Sports Stadium in their semi-final clash to make it a back-to-back final.

The Phobians had a slow start to the game as Dreams FC scored through Sylvester Simba in the 3rd minute.

The lead did not last as Benjamin Yorke pounced on a rebound in the 10th minute to make it 1-1 as the opening 45 minutes ended even.

After the recess, Hearts quickly got infront after Afriyie Barnieh blasted the ball beyond the reach of the goalkeeper to make it 2-1.

Dreams FC were reduced to 10 men in the game as Ibrahim Issah was sent off. Hearts of Oak made their numerical advantage count as they scored the third goal when the ball came off Suraj Seidu and flew over the goalkeeper into the net.

Dreams fought back hard and reduced the deficit through Kofi Karikari.

The game eventually ended 3-2 and this means that Hearts have qualified for the final.

The Phobians await the winner of the game between Bechem United and Aduana Stars which comes off Sunday, May 15.