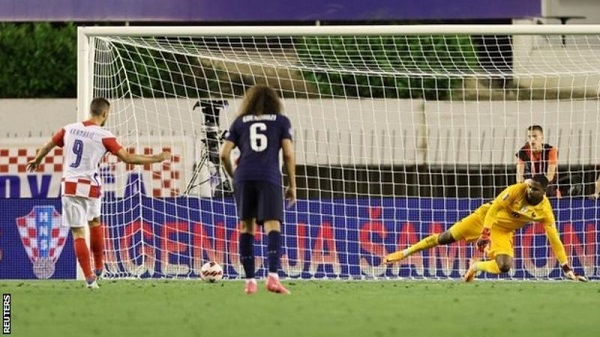 Defending champions France have one point from two Nations League games after being held by Croatia in Split.

Didier Deschamps made 10 changes from the side who threw away a lead to lose 2-1 to Denmark on Friday.

They looked on course for victory when Adrien Rabiot's cool finish from Wissam Ben Yedder's ball gave them the lead.

But Andrej Kramaric scored a fine penalty after the video assistant referee awarded him a spot-kick following a foul by Jonathan Clauss.

Denmark now top the group on six points after winning 2-1 in Austria.

Croatia had chances to win the game but West Ham's Nikola Vlasic was denied by goalkeeper Mike Maignan, who was making his competitive debut, and Luka Sucic dragged a shot wide.

New Aston Villa signing Boubacar Kamara came on for his France debut in the second half.

Denmark overcame Austria in the other game in Group A1 in a game delayed for 90 minutes because of a power failure.

Power went in Vienna's second district before kick-off, causing the long delay, with fans using their phones to shine some light at the Ernst Happel Stadion.

When the game eventually started, a late Danish strike took them top of the group.

Pierre-Emile Hojbjerg swept the Danes into the lead before Xaver Schlager took advantage of some poor defending to level.

Denmark's Christian Eriksen and Austrian forward Marko Arnautovic hit the post as both sides pushed for a winner.

It was a first defeat for Austria's former Manchester United boss Ralf Rangnick, whose side won 3-0 in Croatia last week in his first game in charge.