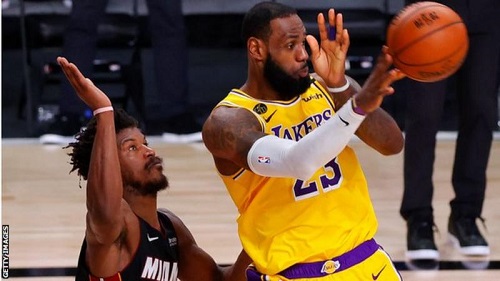 The Los Angeles Lakers are one win from the title after beating the Miami Heat 102-96 in game four of the NBA Finals.

The Heat started the game high in confidence after winning the last match, but the Lakers' defence stood firm and they go 3-1 up in the series.

LeBron James starred with 28 points for the Lakers, while Anthony Davis' crucial three-pointer saw them edge clear late in the fourth quarter.

Game five of the seven-match series is on Friday (Saturday 02:00 BST).

In the dying seconds of Miami's victory in game three, Heat's 40-point star Jimmy Butler warned James that the Lakers were "in trouble".

And for the opening part of game four, Butler's comments were vindicated as James struggled to gain any rhythm in the attritional affair near Orlando, Florida.

Miami, who were boosted by the return of Bam Adebayo from a neck injury, were able to negate the early threat of James and Davis as they came from behind to lead 33-29 in the second quarter.

But the Lakers rallied in the third and James' influence began to grow as he claimed his first three-pointer of the night with a 29-foot effort to put the Lakers 55-54 ahead.

The Heat remained in the contest and Butler tied the game at 83-83 in the fourth but Davis' three-pointer with 39.5 seconds left on the clock all but sealed victory for the Lakers.