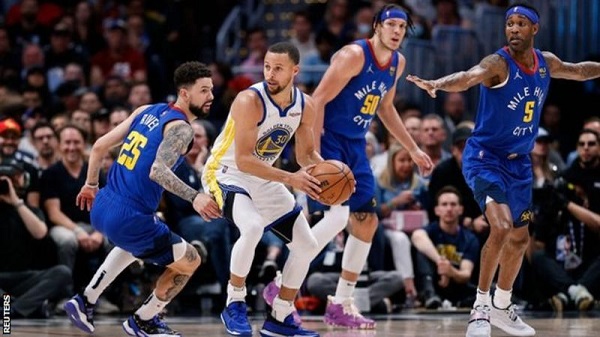 The Golden State Warriors won 118-113 at the Denver Nuggets to take a 3-0 lead in the first round of the NBA Western Conference playoffs.

Stephen Curry and Jordan Poole each scored 27 points for the Warriors, who are aiming for their first championship in four years.

They will seal the series with another win at the Ball Arena on Sunday.

Nikola Jokic had 37 points for Denver, who have lost seven consecutive play-off games dating back to last season.

The Dallas Mavericks survived a fightback by the Utah Jazz to win 126-118 in Salt Lake City and take a 2-1 lead in their series.

Jalen Brunson (31 points) led seven different Dallas players in double digits to compensate for the absence of Slovenian star Luka Doncic, who has yet to play in the series because of a calf strain.

Also in the Western Conference on Thursday, Desmond Bane scored 26 points to lift the Memphis Grizzlies to a 104-95 win at the Minnesota Timberwolves.

Bane sank seven three-pointers as the second-seeded Grizzlies overcame a 26-point deficit in Minneapolis to lead the series 2-1.