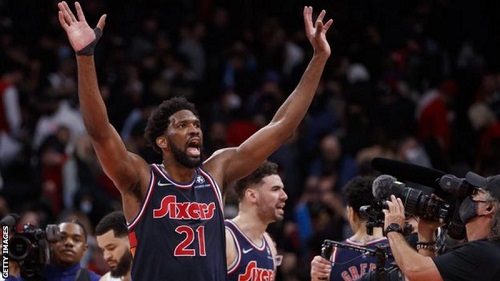 The Philadelphia 76ers beat the Toronto Raptors 104-101 to open up a 3-0 lead in the first round of the NBA Eastern Conference playoffs.

Joel Embiid scored 33 points for the 76ers, with his three-pointer to secure victory coming with less than a second left in overtime.

Briton OG Anunoby scored 26 points for the Raptors at the Scotiabank Arena.

The fourth match of the best-of-seven series is at the same venue in Toronto on Saturday.

The winners will play the Miami Heat or the Atlanta Hawks - Miami lead 2-0 - in the Eastern Conference semi-finals.

The Boston Celtics came from 17 points down to beat the Brooklyn Nets 114-107 and take a 2-0 lead in their play-off matches.

Jaylen Brown scored 10 fourth-quarter points as Boston held the Nets to only 17 points in the final 12 minutes.

The Chicago Bulls beat the Milwaukee Bucks 114-110 to level their series at 1-1.

The Celtic or Nets will meet the Bulls or the Bucks in the semis.