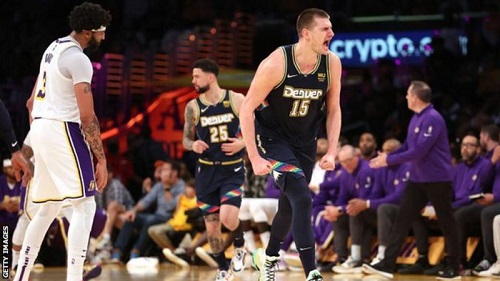 The Los Angeles Lakers' bid to reach the play-ins has been put in serious doubt by a sixth consecutive defeat in going down to the Denver Nuggets.

Playing at home, the Lakers missed LeBron James, who has a sore ankle.

"It sucks," said Lakers coach Frank Vogel. "Sucks telling these guys after every game, 'I'm proud of you. Good effort. We lost.'

"So, it's not fun, but it could be worse. It's easy to unravel. Our group has stayed together. They're putting up the good fight. Their attitude has been wonderful, in terms of just working together to get this thing right.

"And it's just disappointing to come in to keep saying we fell short."

The Lakers, 17-time NBA champions, sit 11th in the Western Conference, having been beset by injuries throughout the season.

Two teams from each division can then secure a place in the end-of-season play-offs.

Anthony Davis, who top-scored for the Lakers with 28 points, said: "I think the biggest thing that I think about personally is what we could have been, had we stayed healthy all year.

Elsewhere on Sunday, Western Conference leaders the Phoenix Suns were handed one of their worst defeats of the season, beaten 117-96 by the Oklahoma City Thunder.