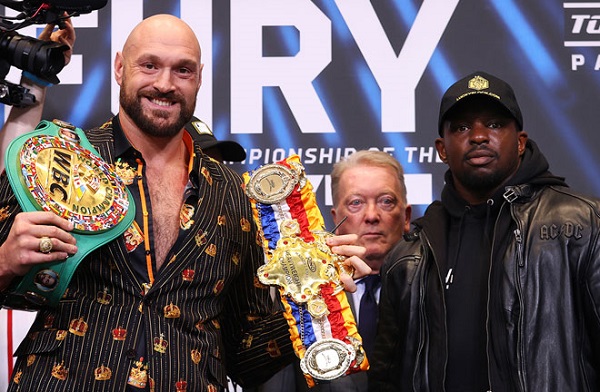 The unbeaten Fury puts his WBC crown on the line against his fellow countryman, having destroyed Deontay Wilder in their trilogy bout in Las Vegas last October.

Fury had eyed a unification showdown with the man who holds the other heavyweight belts, Oleksandr Usyk, but both Whyte and Anthony Joshua rejected step-aside money.

With Usyk and Joshua set to face off once again this summer, it left WBC interim champion Whyte, 34, with the chance to take on Fury, 33, and finally get his shot at a world title.

Whyte has not fought since beating Alexander Povetkin in their rematch last March.

Now, the two domestic rivals will meet in London in an epic showdown.

Irrespective of Sunday's outcome, Tyson Fury will step aside from the ring after having stamped his mark across the heavyweight boxing timeline.

Having previously held the unified WBA (Super), IBF and WBO heavyweight and The Ring titles with his win over Vladimir Kitschko in 2015, Fury raised the bar with his triumph over Wilder in 2020.

With his second The Ring title triumph, Fury became just the third heavyweight boxer after Floyd Patterson and Muhammad Ali to hold the championship twice.

On the other hand, Whyte "The Body Snatcher" will aim to make the most of his shot at becoming the next 'lineal' boxing champion. While Fury's aggression and technical supremacy places him ahead, Whyte can prove to be lethal if the champion's game-plan smells of the slightest frailty.

Tyson Fury: "He's a good fighter. He's a good, strong, solid man. He's big, he's strong, he's tough, he's game, he's got a good punch on him, he's knocked out a lot of men. He's got a lot of experience in the fight game, he was also a kickboxer and an MMA man, so he's definitely a man that needs a lot of respect.

"I've trained as hard for Dillian as I did for (Deontay) Wilder or (Wladimir) Klitschko or anybody. So he'll be fighting the best Tyson Fury. I'm in great shape, I've had good sparring, I've had good food, I've drunk my water and had my vitamins so there's no excuses from me. I'm injury free and that's it."