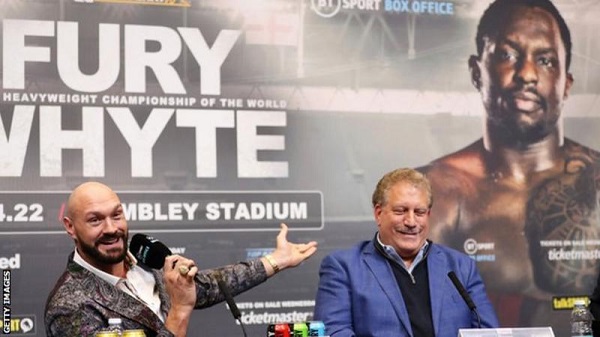 Britain's heavyweight world champion Tyson Fury says he will retire after the defence of his WBC title against Dillian Whyte in April.

The unbeaten 33-year-old is a two-time world champion, winning 31 of 32 professional fights.

He drew with American Deontay Wilder in the first of their three fights, before winning the second and third bouts.

Asked whether he would call time on his career after fighting Whyte at Wembley Stadium on 23 April, Fury said: "100%."

Fury says compatriot Whyte is "terrified" after the Londoner missed the pair's news conference for their fight.

Whyte is the mandatory challenger to Fury's WBC title and is believed to be in preparation in Portugal.

Whyte is only getting 20% of the fight purse and there was speculation he was seeking to renegotiate terms before signing his contract last week.

But Fury's promoter Frank Warren argued the 33-year-old was getting a career-high pay-day.

Fury added: "He's given me that much more confidence it's unbelievable.

"He's terrified. The way he's going on about it, saying he doesn't want to go face-to-face, of course he doesn't, because he'll see that fire in my eyes and he'll think, 'I'm getting smashed to bits'.

"That's what it is - it's fear, it's terror. It's all of the above and I don't blame him for not being here today."

Fury the showman turns up again

There was a huge media turnout and as we all made our way to the press room at Wembley Stadium, we were told Whyte would not be attending.

The Londoner - who has sparred on social media with Fury a number of times over the years - has been pretty much off grid since the bout was announced.

Whyte's no-show on Tuesday is probably down to his frustration at how the fight has been negotiated.

He has had longstanding ongoing legal battles with the WBC regarding his mandatory status and was further aggrieved at the governing body for ordering an 80% purse split in favour of Fury.

He only signed the contract for the fight with a few hours to go last week.

But Fury - in full showman mode - was on hand, and on form. Just some of the soundbites included: "Even Tyson Fury versus his own shadow sells" and "this is going to be a Ferrari racing a Vauxhall Corsa".

He even challenged all of those in the room to a sing-off or dance-off. There were no takers.

Promoter Frank Warren said it was a "disgrace" that Whyte did not turn up. Fury said it would damage Whyte's legacy.

Making this all-British clash has not been straightforward. And should Whyte not appear at future media events, promoting it will not be straightforward either.