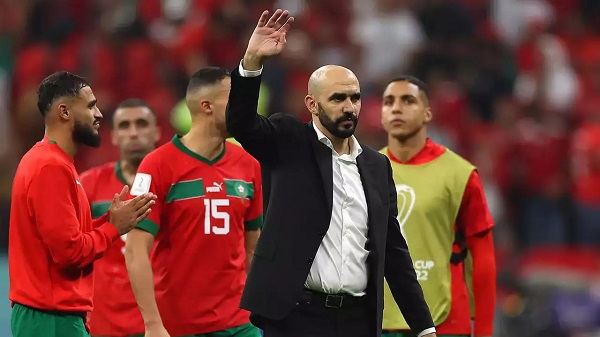 Morocco leave Qatar disappointed but filled with pride at having written their names into the history books by becoming the first African team to reach the World Cup semifinals, their coach Walid Regragui said.

Morocco were beaten 2-0 by France on Wednesday and will go into a playoff for third place with Croatia while the French will face Argentina in the final.

"We realise that we made a great achievement already," Regragui told reporters. "We know that the media, social media, and on TV, we saw the pictures, and we saw that everyone was proud of us in our country.

"We're disappointed for the Moroccan people tonight, we wanted to keep the dream alive. But we're pleased with what we've achieved. We felt that we could have even gone even further but these small details help real champions, which we saw tonight, of course."

Regragui told his players he was proud of them.

"His Majesty was also proud, the Moroccan people were proud," he said. "I think the world as a whole is proud of this Moroccan team because we show great desire. We work hard, and we played honest, hard-working football.

"I think we've given a good image of Morocco and a good image of African football and that was also important for us, because we were representing our country and our continent."

Morocco, who came into the match with the best defensive record in the tournament, conceded from France's first serious attack five minutes into the game.

"Today, if I have regrets, it's the start of the game," Regragui added. "We started quite poorly and we conceded a goal very quickly and that made the difference.

"They allowed us to have quite a lot of possession, but we made too many mistakes to cause them problems."

Regragui thought his team improved in the second half.

"We created a lot of opportunities, but unfortunately we weren't clinical in the last third," he said.

"We tried everything to get a goal but congratulations to France. We're going to support them now."

Morocco lost first-choice centre back Nayef Aguerd in the warm-up after a recurrence of a hamstring injury and their captain Romain Saiss left the pitch injured in the first half.

"In spite of all of the injuries that we had, the tiredness, we pulled out all the stops and we gave everything," Regragui said.

He was pleased that his team had caused France problems.

"But I think physically, we came up short tonight. We had too many players who were 60% or 70%, and have been for a few games now," Regragui said.

"My players gave everything and they've gone as far as they could. I really wanted to rewrite the history books, but you can't win a World Cup with miracles, you need to do it through hard work. And that's what we're going to do."