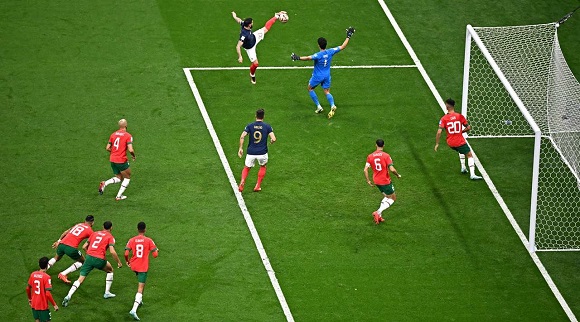 Defending champions France moved a step closer to winning back-to-back World Cups as they saw off Morocco to secure their place in the final against Argentina in Qatar.

Goals either side of half-time earned a 2-0 victory for France, although the African nation provided stern resistance and will feel unlucky not to have more to show for their efforts.

It took Didier Deschamps' side just five minutes to open the scoring, with Theo Hernandez acrobatically converting at the far post after Kylian Mbappe’s fierce shot had taken a deflection and bounced kindly for the defender.

Olivier Giroud then missed a pair of chances, firstly smashing a fierce shot against the woodwork, before he should have doubled the lead when hooking wide from close range.

He was nearly made to pay on the stroke of half-time as Jawad El Yamiq saw his stunning overhead kick bounce back off the post after France had failed to deal with a corner.

That gave Morocco plenty of hope going into the second half, with Yahia Attiyat Allah and Sofyan Amrabat having good chances shortly after the break, only for the former to scuff his shot, while the latter fired wide.

As the game wore on, the attacking fizz that the Atlas Lions were carrying eventually evaporated.

The introduction of Marcus Thuram certainly helped France see the game out more effectively, with his lightning pace on the counter-attack helping the team upfield.

They finally put the game to bed with little over 10 minutes remaining as substitute Randal Kolo Muani, introduced just seconds earlier, tapped home from close range, ending the Moroccan resistance once and for all and booking a showpiece final with Lionel Messi's Argentina on Sunday.