Ronaldinho gives first interview since being arrested in Paraguay 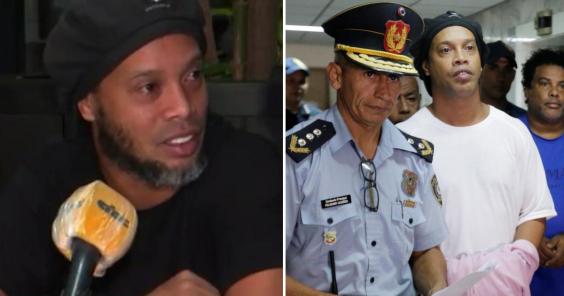 Ronaldinho says he was â€œtotally surprisedâ€ to have been arrested and charged with using a fake passport in his first interview after being released from prison.

The former Barcelona footballer and his brother Roberto Assis were arrested in Paraguay in early March for allegedly using fake documents to enter the country.

After spending 32 days in prison, judge Gustavo Amarilla decided that the duo can live in a hotel in Asuncion while they await trial on their charges.

Speaking to Paraguayan television network ABC Color from the Palmaroga hotel in the Paraguayan capital, the 40-year-old former Brazil international said they came to the country to be at the launch of an online casino.

Former Ballon Dâ€™Or winner Ronaldinho, part of Brazilâ€™s 2002 World Cup-winning squad, said the entire situation had been very hard and he was working with the police to try and resolve matters.

He said: â€œWe were totally surprised to learn that the documents were not legal. Since then our intention has been to collaborate with the justice system to clarify the facts.

â€œFrom that moment until today, we have explained everything and facilitated everything that has been requested of us.â€

Speaking of the moment he was told he was going to jail, Ronaldinho said: â€œIt was a hard blow, I never imagined that I would go through such a situation. All my life I have sought to reach the highest professional level and bring joy to people with my football.â€

The former Barca star said heâ€™d had plenty of opportunities to play football in prison and was constantly stopped for autographs and photos even when inside the maximum security Agrupacion Especializada prison after being arrested at the Resort Yacht and Golf Club Paraguay.

Ronaldinho said that despite being arrested and charged he felt no ill-will towards the people of Paraguay, and that his religion had helped him through the situation.

He said: â€œThe warmth, affection and respect of all Paraguayans has been felt from the first day I arrived in the country until today, and I am very grateful.

â€œI have my faith. I always pray for things to go well and hopefully this will be over soon.â€

According to ABC Color, the interview was held face to face in the hotel despite the coronavirus lockdown, with stringent hygiene measures in place.

Social distancing was practiced, protective covers were placed on microphones and Ronaldinho wore a face-mask at all times except when answering questions.

Ronaldinho said that the first thing he would do once the situation is resolved is go to see his mum.

He said: â€œThe first thing will be to give a big kiss to my mother who has lived through these difficult days since the start of the Covid-19 pandemic in her home, then it will be to absorb the impact that this situation has generated and move forward with faith and strength.â€

Ronaldinho's lawyers have previously argued that their client had been given the Paraguayan passport as a gift from a local sponsor, and was unaware he was doing anything wrong by using it.

The 2005 Ballon d'Or winner had already seen his Brazilian and Spanish passports seized by Brazil's authorities in 2019 because of separate legal issues.