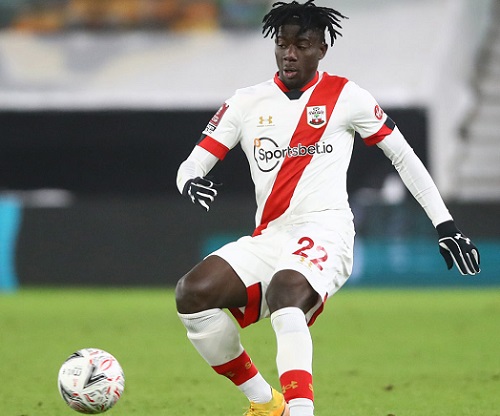 Mohammed Salisu on Thursday finally made his debut for Southampton as they eased past Wolves 2-0 in the  FA Cup.

The 21-year-old saw 90 minutes of action, helping The Saints progress to the sixth round of the cup competition.

In the end, second-half goals from Danny Ings and Stuart Armstrong decided the fixture at Molineux.

Speaking after the game, head coach of the Saints,Ralph Hasenhüttl was full of praise for his team especially Ghanaian centre back who did a good job on the day after making his first start since joining the English side on a four-year deal from Spanish side Real Valladolid in August last year.

“It was a good performance from the team today. From the first moment, we showed that we wanted to go into the next round,” Hasenhüttl said. “I am very proud of the team.

“It’s good that we have a few players back (from injury). With Sali and Kyle, it gives you more opportunities and gives us the chance to stick to the game plan and play a good game.

“Normally you get self-confidence with winning games, but we didn’t win in the past weeks.

“It (self-confidence) can also come from getting players back on the pitch. Today we had a few more options, and especially Kyle and Sali did a good job today, and all the rest were really strong and well committed.

“After a few difficult weeks, it was important we picked a strong side and go for a win. It can lift you.”

Meanwhile, Southampton will make a trip to face Bournemouth in the next round of the competition.