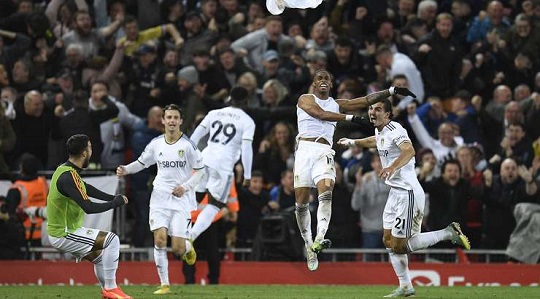 Crysencio Summerville scored a 90th-minute winner for Leeds United to give the Yorkshire-based outfit a 2-1 win over Liverpool at Anfield. The victory ended a run of 12 winless matches against the Merseyside club in the process.

In the first half against the Whites, we saw the best and worst this Liverpool side has to offer. It took less than four minutes for Jürgen Klopp’s men to make the first costly mistake, as Joe Gomez’s backpass wrong-footed goalkeeper

Alisson and allowed Rodrigo to tap into an empty net. Mohamed Salah had already had a shot cleared off the line by that point, and he capped off a period of Liverpool resilience by equalising around the quarter-hour mark, firing home from close range from Andrew Robertson’s chipped pass to the back post.

Being pegged back did not deter the visitors, though, who had two fantastic chances to retake the lead. First, Brenden Aaronson volleyed Rasmus Kristensen’s pinpoint cross onto the bar, before Jack Harrison fired straight at Alisson in the penalty area.

Liverpool, in contrast, were unable to truly test Illan Meslier, with Salah’s curled effort from outside the area that was easily stopped by the Frenchman their best opportunity.

The second half was riddled with sloppy play from both sides, which will have infuriated the two managers on the sidelines, both of whom needed all three points. That, though, did make it a thrilling match for the neutral, especially as the clash was played at such a high intensity.

Liverpool were the more dangerous team, with Robertson working Meslier before Darwin Núñez did so from an even more threatening position. From 25 yards, the Uruguayan once again tried his luck, only to be denied again by the Leeds goalkeeper, and Meslier was also on hand to stop Roberto Firmino’s albeit scuffed volley.

Meslier made another stunning save from the Brazilian before the visitors struck at the death. Virgil van Dijk, who had previously not lost a home PL game for the Reds in 79 outings, and his defensive teammates were unable to clear, allowing Summerville to poke beyond Alisson and into the corner. This defeat will be a bitter blow for Klopp, and his side remain in ninth as they continue to stutter. For Jesse Marsch, meanwhile, this is a first PL away win, and he will hope his side can now push on and move up the table.