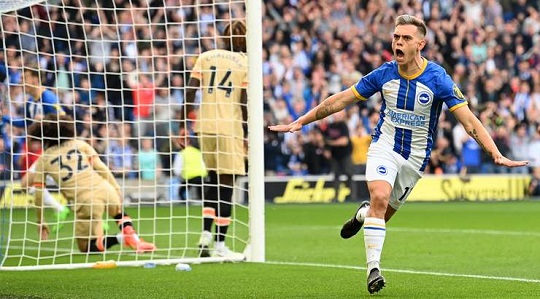 Brighton stunned Graham Potter with a 4-1 mauling of his Chelsea side on his return to his former club.

Leandro Trossard continued his run of scoring in every game under Roberto De Zerbi with the opener after five minutes, and Ruben Loftus-Cheek turned a corner into his own net nine minutes later to put the visitors in a big hole.

De Zerbi was chasing his first victory as Brighton boss, and he appeared to have gotten his tactics spot on with a surprise switch to a back four.

Brighton were threatening every time they went forward, and only two heroic clearances from Thiago Silva kept the score down.

Just before half-time though, Brighton got their third after Pervis Estupinan raced down the left and fizzed a ball into the near post. Trevoh Chalobah got the final touch, but Japan winger Kaoru Mitoma would have scored if the Chelsea defender hadn’t.

Kepa was replaced by Edouard Mendy at half-time, with the Spanish goalkeeper apparently suffering an injury.
Chelsea needed to start fast in the second half and they did just that when Kai Havertz drifted away from his defender to head home Connor Gallagher’s excellent cross.

The match was on a knife-edge, but Brighton held fast and continued to threaten on the break.
Brighton’s Paraguayan teenager Julio Enciso was thrown into the mix and immediately caused Chelsea trouble with his pace and energy.

The Blues continued to press but the home side held on and added a fourth late on through Pascal Gross for their first ever league victory over Chelsea, and their first in all competitions since 1933.