U-20 AFCON: Black Satellites coach makes a change in starting XI against Morocco 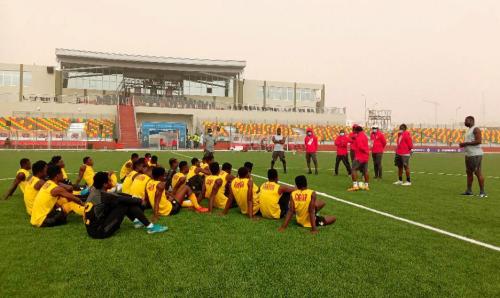 Patrick Mensah has been handed a starting role in Coach Abdul Karim Zito’s Black Satellites team for today’s U20 African Cup of Nations match against Morocco.

Mensah replaces Eric Ansu Appiah who started in Ghana’s 4-0 win over Tanzania in the opening game.

Danlad Ibrahim retains his position in post and will once again start the game as skipper of the side with Frank Assinki and Nathaniel Adjei in central defense.

Samuel Abbey- Ashie Quaye and Philomon Baffour will be on the left and right side of defense respectively.

Abdul Fatawu Issahaku who was the MVP from the group opener will be in midfield while Emmanuel Essiam and Patrick Mensah play in front of the defense.

A win for Ghana will ensure qualification to the next round of the competition.

The game will be played at the Stade Municipal Nouadhibou at 7pm GMT.

Below is Ghana’s XI vs Morocco: