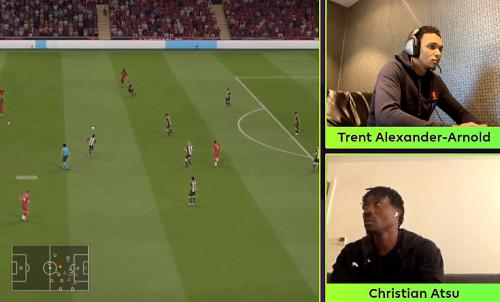 Atsu made his way pastÂ Moussa Sissoko who was representing Tottenham Hotspur in his opening game to advance to the quarter final of the competition.

But the quarter final match against Liverpool's Trent Alexander Arnold proved a tough task for him as he was beaten 4-1 despite taking the lead and Wakaso has taken to Twitter to poke fun at the Newcastle United star.

Hmmm after all the training given to you 2days ago you still went out there to disgrace your self and @NUFC ah I told them you don’t know anything 😂😂😂😂😂 what a disgrace you see your face 😂😂😂 I laugh enter Volta market @ChristianAtsu20 what a day for me God no be lefty 😂 pic.twitter.com/oq9qxtEYYn

The have been having a go at each other with Mubarak Wakaso revealing in an interview that, Atsu has been mocking him with a video in which Messi left him dazed in a match.

Prior to the suspension of the English Premier League, Atsu had played 18 times for Newcastle in the Premier League this season, but only eight were starts, three of which he completed the 90 minutes in.

The 27-year-old Ghanaian has a year left to run on his contract and has been tipped for a move away from St. James' Park in search of more first-team football.