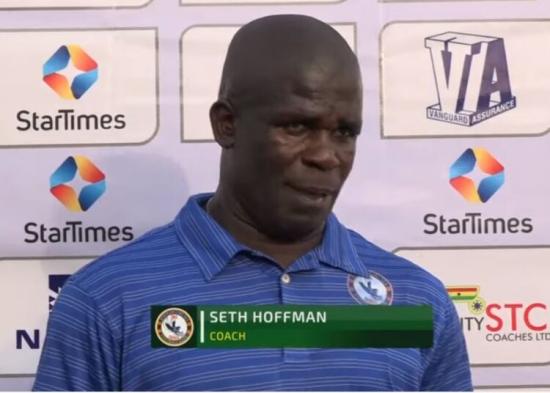 Berekum ChelseaÂ coachÂ Seth Hoffman was left fuming with his side after ''two gifts" saw themÂ lose 2-0 to Asante KotokoÂ on Sunday.

Seth Hoffman's side failed toÂ make it two wins in a row after last week's 2-1 victory over Legon Cities as Kotoko beat them at the Len Clay Stadium.

Chelsea in the first round held the Porcupines to a 1-1 draw at the Berekum Golden City Park after Emmanuel Clottey's last-minute kick cancelled out Kwame Opoku's opener.

However, in the reverse fixture on Sunday, Kotoko scored two goals courtesy Andy Kumi and Godfred Asiamah in either half toÂ condemn Berekum Chelsea to defeat on matchday 19 of the Ghana Premier League.

Speaking after the game, the former Hearts of Oak coach, Hoffman said Chelsea made it too easy for the Porcupines. He believed his team at a point deserved an equalizer.

"It was a great game and tactically we started well, we got chances but we didn't utilize them and they caught us by surprise by taking the lead. We did our best to level the score but unfortunately, we missed a crucial chance through the penalty spot.

My boys lost a bit of concentration ... I congratulate Kotoko but we gave them the goals'' he said.

Meanwhile, the Porcupine Warriors are now the league leaders with 34 points after the win over Berekum Chelsea.