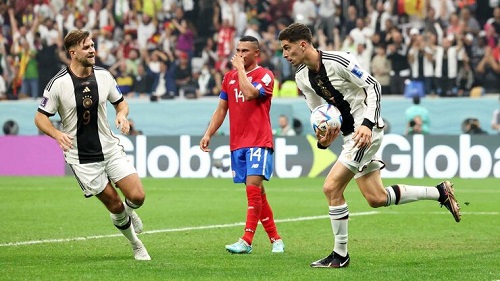 Germany were knocked out in the FIFA World Cup group stage for the second successive tournament despite beating Costa Rica 4-2 as Group E came to a captivating close.

After one point from their first two matches, it was crunch time for Germany and only a win would do. From the first minute, they dominated possession while putting their opponents under extreme pressure and, by the time Serge Gnabry opened the scoring in the 10th minute, Jamal Musiala and Thomas Müller had spurned presentable chances. Gnabry’s header was far more controlled than his Bayern Munich teammate's and left Navas grasping at thin air.

Soon after, Spain took the lead in the group’s other game through Álvaro Morata, a goal which took Germany up to second place and in position to progress to the Round of 16. Hansi Flick’s side, though, did not take their foot off the gas, with Leon Goretzka, Joshua Kimmich, Musiala, and Gnabry all having further opportunities. Despite their superiority, Germany’s one-goal advantage was frail, something which was almost proven just before the interval. In his 19th WC outing - the most of any goalkeeper in the history of the tournament - Manuel Neuer needed to make a reflex stop to push Keysher Fuller’s effort over the bar after a defensive mix-up.

Soon after the restart, Japan netted two quick goals against Spain to move ahead, leaving Germany’s campaign on the brink. Needing six more strikes, Flick introduced Niclas Füllkrug, however, it was Costa Rica who instead netted the next goal - Yeltsin Tejeda reacting first to Neuer’s brilliant save from Joel Campbell to prod home. Germany almost found a quick response via Musiala, but his effort hit the post, before Antonio Rüdiger struck the woodwork from less than six yards. Incredibly, Musiala was denied by the post once more as it appeared Germany’s luck had run out. In another barely believable twist, Juan Vargas poked home from close range to not only put Los Ticos ahead but also potentially send both Germany and Spain out of the tournament.

The lead lasted seconds, with substitute Kai Havertz chipping over a sprawling Navas to level proceedings. Havertz then bagged his second as the game approached its climax, calmly putting Gnabry’s cross into the corner, before Füllkrug put the win beyond doubt in the last minute of normal time. In the end, though, it wasn’t enough, as Japan held on in their encounter to top the group with Spain in second. Germany have played well for much of their three games, but a lack of a clinical edge and defensive lapses in concentration ultimately cost them dearly.