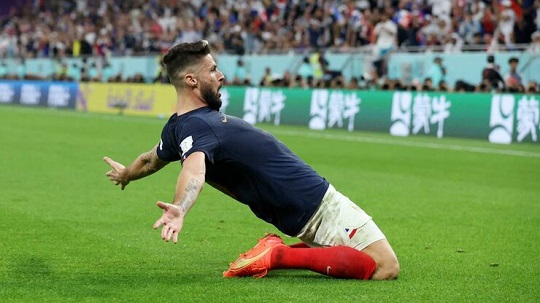 Olivier Giroud moved ahead of Thierry Henry to become France’s all-time leading goalscorer, in a game which also witnessed a Kylian Mbappé brace, as Les Bleus sealed their progression to the FIFA World Cup quarter finals with a 3-1 victory over Poland.

Whilst nine changes in their final group match may have cost the reigning world champions their unbeaten record at this tournament, it allowed Didier Deschamps to restore a whole host of talent to their starting XI in the hope of going full throttle at their opponents.

That being said, it was the Eagles who came out firing, and Piotr Zieliński was denied what looked destined to be the opening goal by Hugo Lloris from close range, before Raphaël Varane blocked the follow-up on the line.

The tie looked to be on a knife edge heading into the break, but a moment of magic seconds before the referee’s whistle saw Les Bleus take the lead through Giroud’s record-breaking finish - his 52nd in 116 appearances for the French national team.

A neat set-up by Mbappé to deceive the Polish back line allowed his strike partner all the time in the world to take a touch in the box and calmly fire beyond his former Arsenal teammate Wojciech Szczęsny into the bottom right corner.

This spelled disaster for the Polish as they would have to buck the trend of their last five World Cup fixtures, which have not seen both teams on the scoresheet, if they wished to extend their first knockout stage appearance since 1986 beyond the Round of 16.

Czesław Michniewicz’s men threw the kitchen sink at France in the second half, but ultimately it would be their downfall as Mbappé sealed Les Bleus’ passage into the next round on the counter, smashing into the top left corner on the counter, with Szczęsny left helpless.

Mbappé added a third for good measure in the 90th minute, burying a powerful effort into the top right corner, this time from a similar position to his first goal, before Robert Lewandowski pulled one back from the penalty spot as the current holders bounded into their fourth quarter finals in their last five World Cup appearances.

A France side containing two in-form forwards will likely be full of confidence and they will now eagerly await the result of England vs Senegal later today to discover their opponent in the next round.