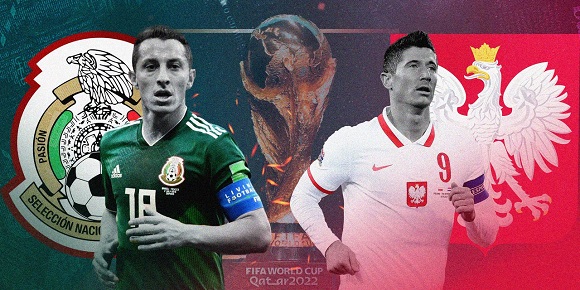 Mexico and Poland will open their FIFA World Cup 2022 campaigns in what could be a pivotal fixture in the context of Group C.

Stadium 974, a unique, one of its kind arena constructed using 974 shipping containers, will play host when Mexico open their World Cup campaign against Poland. Gerardo Martino is tasked with leading the Mexicans in their ninth consecutive World Cup appearance.

The Argentine manager will be wary of the expectations placed upon him. Mexico were eliminated from the last 16 stages in each of their last seven entries in the knockout rounds, which is something they need to change this time.

Their clash with Poland is crucial in the context of Group C, as a win would put the Mexicans in pole positions and boost their chances of getting into the next round. They haven’t reached the last 8 since hosting the tournament in 1986.

After a period of turbulence, Poland has found balance within their squad. The appointment of Czeslaw Michniewicz earlier this year proved an instant hit after the manager guided them to a 2-0 win over Sweden in the qualifying play-offs.

Argentina are this group’s clear favorites to qualify for the next round. Mexico and Poland are likely to compete for the other place. Hence a positive start to the tournament is vital for the Poles.

Going by their recent history, Poland have fared terribly in World Cups. They have one win and two losses in their last three entries into the tournament in 2002, 2006, and 2018. They will aim at not repeating those previous endeavours and start brightly in Qatar.

Gerardo Martino will likely field an attacking set up and maintain his philosophy. While he has all 26 players available for selection, there could be caution with the selection of Raul Jimenez, who has not played since the end of August.

He may come as a substitute against Poland, with Henry Martin likely leading the line for Mexico. The formidable Guillermo Ochoa will take his place between the sticks, with a back four of Jorge Sanchez, Nestor Araujo, Cesar Montes, and Jesus Gallardo.

Edson Alvarez will hold the midfield together for Mexico, with Carlos Rodriguez and Andres Guardado on either side of the Ajax star. They have further options from the bench to shore up the team during the game.

Napoli attacker Hirving Lozano will start on the right side of the front three, with Alexis Vega on the other flank. Martin will lead the line for Mexico, hoping to start the campaign brightly.

Unlike his counterpart in the Mexico dugout, Czeslaw Michniewicz will take a pragmatic approach to the game and field a more defensively sound unit. He has preferred a back three and is likely to keep the shape ahead of the opening game in Qatar. Wojciech Szczesny will be the first-choice goalkeeper for the Polish.

Jan Bedranek, Kamil Glik, and Jakub Kiwior are likely to take up the central defensive positions. Matty Cash will have to battle for the right wing-back slot, although the Aston Villa defender will likely star there against Mexico.

Nicola Zalewski will likely take the left wing-back spot, while Poland will go with a midfield three. Krystian Bielik will anchor the midfield and have Sebastian Szymanski and Piotr Zielinski on either side. The latter is likely to provide the attacking impetus from central positions.

Karol Swiderski and star striker Robert Lewandowski will lead the line for Poland. The latter will have all the focus on him as the nation will depend on his good form as a marker for progress.

The 34-year-old will be the highest-profile player on the pitch when Poland takes on Mexico. Lewandowski will be under pressure to deliver in Qatar, as fans do not want to see a repeat of how the team performed in Russia. The veteran striker failed to score in the three games, as Poland crashed out early.

Much like the last decade, Poland’s chances will hinge on the broad shoulders of Lewandowski. Whether the striker delivers this time remains a question, although he would be highly motivated to have a good tournament in Qatar.