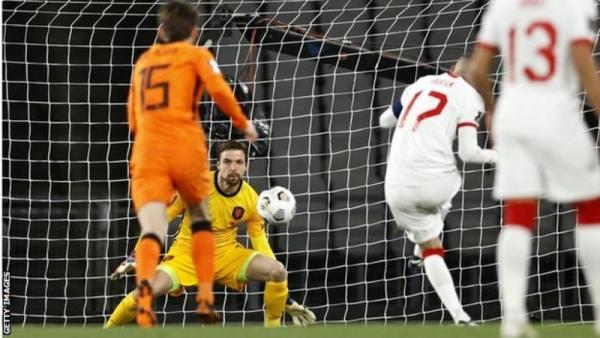 Netherlands began their 2022 World Cup qualifying campaign with a surprise defeat by Turkey.

The Dutch, runners up in 2010, fell behind when Burak Yilmaz's deflected shot wrong-footed goalkeeper Tim Krul.

Yilmaz then converted a penalty before Hakan Calhanoglu curled in a third.

Memphis Depay saw a late spot-kick saved for the Dutch, who threatened to fight back via goals from Davy Klaassen and Luuk de Jong, but Yilmaz's superb free-kick rounded off the scoring.

It proved a difficult evening for the Netherlands who initially struggled to trouble Ugurcan Cakır in the Turkey goal.

Matthijs de Ligt went close to scoring for the Dutch just before half-time but his header was cleared off the line.

And while two goals in the space of two minutes, from substitutes Klaassen and De Jong, gave them a way back into the contest, they were second best for long periods.

Elsewhere, France were held to a surprise draw by Ukraine as they got their 2022 World Cup qualifying campaign under way.

The world champions began confidently and deservedly went ahead when Antoine Griezmann superbly curled a left-foot effort into the corner from 18 yards.

In Wednesday's other Group D fixture Finland drew with Bosnia-Herzegovina.

It had looked like being a comfortable evening for Didier Deschamps' France side when Griezmann's expertly registered his 34th international goal.

But Chelsea forward Olivier Giroud was twice unable to convert good opportunities to score and Bayern Munich winger Kingsley Coman appeared to have a valid penalty claim when he was brought down by Ukraine goalkeeper Georgi Bushchan.

Those moments provided the visitors with the impetus to hit back, with Sydorchuk's effort their first on target but only after a significant diversion off France defender Presnel Kimpembe.

While the hosts introduced Paul Pogba and Anthony Martial, the visitors merited their hard-fought point.