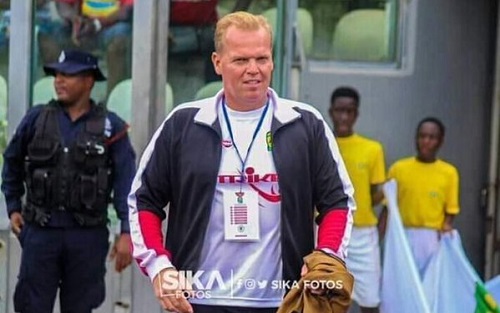 Former Asante Kotoko coach, Kjetil Zachariassen has vowed never to work again under the current management of the club.

Kotoko terminated the contract of the Norwegian trainer last year, 4 months after his appointment. According to the Porcupines, the decision to part ways with Zachariassen was reached after he failed to get the club into the CAF Champions League and Confederation Cup group stages.

Dr Kwame Kyei's led administration has been accused of failing to steer the affairs of the club properly since taking over from Samuel Opoku Nti.

Speaking to FOX FM, Zachariassen expressed his displeasure about how the management of the Porcupine family are running the affairs of the club.

The coach, who is currently on a scouting mission in Nigeria believes the current management does not have any idea about running the football.

The former Ashgold gafferÂ has lashed out at the clubâ€™s management members, labelling them as dumbs and belly-filled and should resign from the club in an exclusive interview with Kumasi-based Oyerepa FM on Tuesday.

â€œI always believe that coaches need to be coaches and management should be doing management they should never miss that.â€

â€œBut the way they did it is way over the line by far over the line. When they point with their finger to one person, 3 is going back to them, donâ€™t blame others, they should blame themselves.â€

â€œWhen we had a meeting and they wanted to sack me, all of them were there, all management and quote me they said Coach now we are here at crossroads, so they want to sack me and I said if I am going we should all go because we are in this together, we have done this together.â€