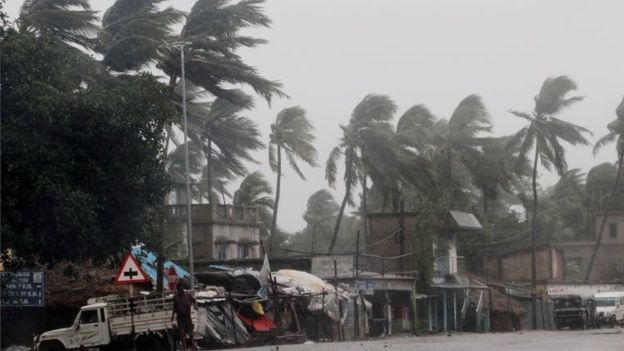 The eastern Indian city of Kolkata has been devastated by a powerful cyclone which has killed at least 22 people across India and Bangladesh.

Storm Amphan struck land on Wednesday, lashing coastal areas with ferocious wind and rain. It is now weakening as it moves north into Bhutan.

Thousands of trees were uprooted in the gales, electricity and telephone lines brought down and houses flattened.

Many of Kolkata's roads are flooded and its 14 million people without power.

The storm is the first super cyclone to form in the Bay of Bengal since 1999. Though its winds had weakened by the time it struck, it was still classified as a very severe cyclone.

Coronavirus restrictions have been hindering emergency and relief efforts. Covid-19 and social-distancing measures made mass evacuations more difficult, with shelters unable to be used to full capacity.

Amphan began hitting the Sundarbans, a mangrove area around the India-Bangladesh border home to four million people on Wednesday afternoon, before carving north and north-eastwards towards Kolkata, a historic city that was the capital of the British Raj.

Parts of West Bengal and Orissa (Odisha) states in India, and areas in south-west Bangladesh, bore the brunt, with winds gusting up to 185km/h (115mph).

At least 10 deaths in Bangladesh and 12 in India's West Bengal state have so far been confirmed by the authorities.

West Bengal chief minister Mamata Banerjee said the devastation in Kolkata, the state capital, was "a bigger disaster than Covid-19".

"Area after area has been ruined," Ms Banerjee was quoted as saying by the Press Trust of India news agency. "I have experienced a war-like situation today."

Three districts in West Bengal - South and North 24 Parganas and East Midnapore - were very badly hit. In Bangladesh, the worst-affected district was Satkhira, where large areas have been flooded as embankments collapsed in several places.

Initial assessments of the damage are being hampered by blocked roads and flooding in all these areas.

BBC Bengali's Amitabha Bhattasali in Kolkata says much of the city and its neighbouring districts have been without electricity for a day. Mobile phone networks are not working in some of the worst-hit areas.

"Thank God, we are safe," said a resident, who shared footage of tiled roofs being peeled off by the force of the wind and blown away.

"Even with all doors and windows tightly shut, my house groaned under the pressure of the howling wind outside. Within 45 minutes, the streets outside got flooded, even as flood waters rushed into the ground floor of homes.

"When the power lines were restored after the storm, neighbourhood children, much like our own childhood when power-cuts were rampant, burst out in a spontaneous, cheerful chorus."

Kajal Basu, who lives on the 12th floor of a high-rise building in the city, wrote on Facebook after the storm began: "It is like the vault of hell outside."

The building seemed to be "swaying from side to side, mimicking an earthquake", he said. "Sounds of tortured metal, glass breaking. Palm trees uprooted. Power lines came crackling and spitting at three places nearby."

Most people were at home when the storm struck. Kolkata and the rest of India is in lockdown because of the coronavirus pandemic.

Officials in Bangladesh fear Amphan will be the most powerful storm since Cyclone Sidr which killed about 3,500 people in 2007. Most died as a result of sea water surging in.

Meteorologists have also warned of flooding and deadly mudslides.