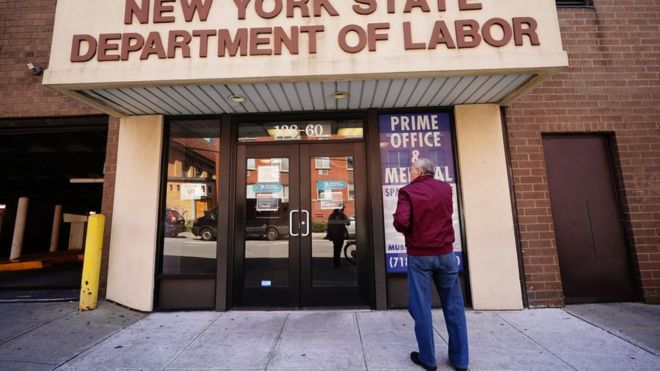 The new Department of Labor filings bring the number of jobless claims over the last four weeks to more than 20 million.

That amounts to roughly as many jobs as employers had added over the previous decade.

The economic crisis comes as the number of US virus cases exceeds 629,000.

The surging joblessness is a stark reversal for the world's biggest economy where the unemployment rate had been hovering around 3.5%.

Economists now expect that rate to have hit double digits.

While the 5.2 million new claims in the week ended 11 April were down from 6.6 million the previous week, the numbers still eclipse prior records.

Many economists warn that elevated numbers will linger, with Goldman Sachs researchers expecting some 37 million claims by the end of May.

"Records are being broken left and right with respect to the depth and breadth of the current downturn," said Mark Hamrick, senior economic analyst at Bankrate.com.

"With no immediate end in sight to efforts aimed at mitigating the virus' spread and impact, it is impossible to see a near-term upturn in employment prospects."'

Electronics chain Best Buy this week said it would furlough more than 50,000 employees, while Royal Caribbean Cruises announced it would cut or suspend about a quarter of its American workforce.

The moves come as retail sales plunged by a record 8.7%, while manufacturing output dropped by the most in more than 74 years.

The US has expanded its unemployment programme, making disbursements bigger and more people - including the self-employed - eligible. But requests to participate have overwhelmed state offices, which process the applications.

Glenn Hawker, co-owner of a now-closed hair salon in Virginia, said he had applied for the funds as an independent contractor at least twice and been rejected. When he called to figure out why, he couldn't reach anyone.

READ ALSO:Coronavirus: Trump says peak is passed and US to reopen soon

Mr Hawker had also sought assistance through a loan programme for small businesses, but he has not received any.

On Thursday, the Small Business Administration, which is in charge of administering that $349bn programme, announced it had run out of money.

Restaurant owner George Constantinou last month laid off most of the 130 people who work at the four businesses he owns in New York and New Jersey, retaining a core group to continue doing take-out and delivery.

He said he expected the move would allow the business - which saw sales drop some 80% in the early weeks - to conserve money and workers to receive at least some pay until he could bring them back.

Amid delays to claims processing, some staff have sought his help in applying for food stamps. If the economic downturn is prolonged, re-hiring everyone may not make sense, even after he can fully reopen.

"At this point, we have to take it almost day by day to figure it out," he said.

US President Donald Trump is expected to issue "new guidelines" for reopening the economy in parts of the country where experts believe the rate of infection is under control.

"There has to be a balance," he said on Wednesday. "We have to get back to work."