Â Japan to close all schools to halt spread of Coronavirus 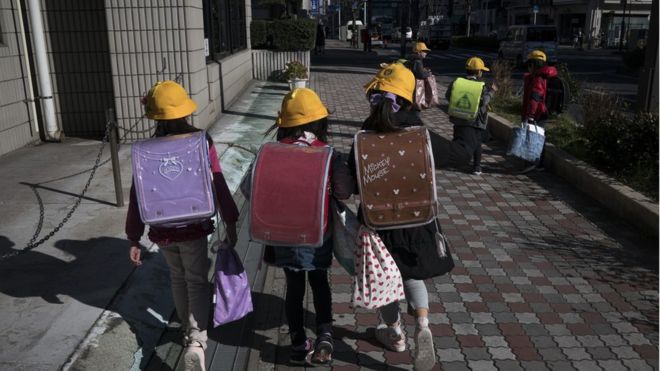 Japan is to ask all schools to close from Monday to prevent the spread of the coronavirus, Prime Minister Shinzo Abe says.

The closure - thought to affect 13 million students - will continue until the school year ends in late March.

A further 13 people have the virus in the northern Hokkaido region and there are clusters across the country.

One woman in her forties in Osaka is said to have tested positive for a second time after earlier recovering.

Meanwhile, health officials in the southern Chinese province of Guangdong say some patients there who recovered and were discharged from hospital have again tested positive.

The authorities in both countries say they will track former patients after they are discharged from hospital.

What measures are other countries taking?

Globally, more than 80,000 people in more than 40 countries have been infected. Nearly 2,800 have died, the vast majority in China's Hubei province.

Iran, where 26 people have died, has cancelled Friday prayers in Tehran and banned Chinese citizens from entering
Saudi Arabia is stopping foreign pilgrims entering the country. It is not clear if the Hajj pilgrimage, which begins in July this year, will be affected

Australia is extending a ban on foreign visitors from mainland China
Italy, where 14 people have died, has quarantined 11 towns
Greece is cancelling all carnival activities

"This is not a time for fear. This is a time for taking action and saving lives," he told journalists.

Why is Japan closing schools?
The closures are set to take effect on Monday and will last until the end of spring vacation - typically in early April.

Mr Abe said the first weeks of March would be an "extremely critical period" for preventing virus transmission.

"The government attaches the top priority to the health and safety of children," he said.

It follows China's decision not to re-open schools on the mainland after the Spring Festival holiday and instead ask nearly 200 million students to follow classes online from their homes. Hong Kong is also keeping schools closed until April.

Many parents in Japan are concerned about what they will do with their children.

"My honest feeling - all schools on break? It's important to protect children, but what happens if they have working parents?" one parent wrote on social media.

More than 200 people have so far been infected with the coronavirus in Japan.

The Japanese woman in Osaka who tested positive again did so after developing a sore throat and chest pains, officials said.

A tour guide who had come into contact with visitors from the Chinese city of Wuhan where the outbreak began, she first tested positive in late January and was discharged from hospital on 1 February, a statement said.

Is it possible to be re-infected?

There is still much that scientists don't know about this virus - and that includes the possibility of it infecting people more than once.

Reports from China and Japan suggest that a small number of people recovered from the virus and then tested positive again within weeks.

But there may be several reasons why that appears to be the case.

Firstly, the virus may not have completely gone away before they were discharged and allowed home, and then may have got worse again.

Secondly, although tests are used to determine if the virus is still present, they are not always accurate and may not be sensitive enough to detect dormant virus or very low-level symptoms.

The fact is that more information on these specific cases is needed before scientists can come to any conclusions about whether the virus gives future immunity.

If reinfection is possible, some experts say the virus could act like the flu or common cold and infect people on a seasonal basis.

What is happening elsewhere?
In the Middle East Iran has emerged as a major centre of coronavirus cases with 26 deaths and nearly 250 confirmed cases.

Several government officials are among those infected - including Vice-President for Women and Family Affairs Masoumeh Ebtekar, according to state media. Deputy Health Minister Iraj Harirchi and two MPs also have the virus.

Ms Ebtekar's symptoms are reportedly not severe and she is not in hospital.

The WHO's Michael Ryan said the extent of infection in Iran "may be broader than we think".

But he said the country had a "very high clinical capacity" and the current 10% death rate for cases there probably reflected screening that was not picking up mild coronavirus cases.

Kuwait and Bahrain recorded more cases on Thursday, all in people who had visited Iran, bringing their totals to 43 and 33 respectively. Lebanon has announced its third confirmed case, an Iranian citizen.

In Asia South Korea saw new cases bring its total infections to 1,261 with 12 deaths. Singapore said a 12-year-old student at the top Raffles Institution school was among three new cases, bringing its total to 96.