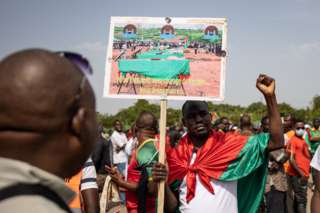 Militants freed about 60 inmates during an overnight attack on a jail in north-west Burkina Faso.

The armed men entered the town of Nouna around midnight on aboard 4x4 vehicles and motorbikes, brandishing Kalashnikovs and heavy machine guns.

They ransacked offices and set fire to vehicles before making their escape.

The raid came after militants killed at least 12 people in northern Burkina Faso, most of them members of a volunteer militia.

The country is battling a jihadist insurgency that's been spreading across the Sahel over the past decade.

A military government seized power in January and ousted President Roch Kaboré, blaming him for failing to tackle the jihadist insurgency.