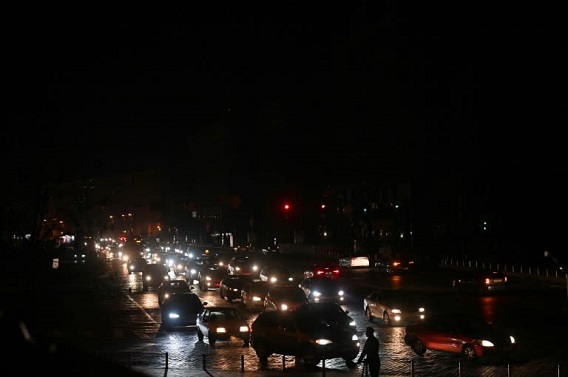 Ukraine's President Volodymyr Zelensky has accused the Kremlin of resorting to "energy terrorism" as Russian troops make few gains on the battlefield.

In recent weeks, Russia has carried out large-scale missile and drone attacks on Ukrainian power facilities.

The strikes come as officials say Russian troops are likely to withdraw from the key southern city of Kherson.

After suffering a series of painful defeats on the battlefield, Russia has stepped up attacks in recent weeks on electricity infrastructure in cities away from the front lines.

In just the last month, a third of the country's power stations have reportedly been destroyed, according to President Zelensky.

The Ukrainian government has been forced to urge the population to try and use energy sparingly as a result.

"Tonight, about 4.5 million consumers have been temporarily disconnected from energy consumption," President Zelensky said in his nightly address on Thursday.He said Russia's targeting of energy infrastructure was a sign of "weakness" as Russian forces fail to make much ground on the frontline.

"The very fact that Russia is resorting to energy terrorism shows the weakness of our enemy," he said.

"They cannot beat Ukraine on the battlefield, so they try to break our people this way."

Russia's ministry of defence has confirmed it is targeting Ukrainian energy infrastructure.

A Russian-installed official in the Kherson region, Kirill Stremousov, told Russian media that Moscow was "likely" to pull its troops from the area.

And according to a Western official, speaking on condition of anonymity, most Russian commanding officers have already withdrawn from the city.

Instead of trying to keep control of the city, they said Russian troops were building up their defensive positions on the other side of the Dnipro River, as part of a wider Russian move to establish better defensive lines throughout southern and eastern Ukraine before the arrival of winter.

It is difficult to know what exactly is happening inside the city, but the official said mobilised Russian reservists had been sent into the city to cover the final retreat when it happens.

In addition, the BBC's international affairs correspondent Paul Adams says that banks have reportedly been emptied and museums have been looted.

Occupying authorities have also been evacuating thousands of civilians from the area over a number of weeks.

But Ukraine said it was still fighting in the area and remains cautious in case Russia is setting a trap for Ukrainian troops.

Russia's capture of Kherson - a major city - in March was seen as one of Moscow's most significant achievements in the war.

But a Ukrainian counter-offensive in the area, which has been under way for more than a month, has meant that Russia has had to reassess its battlefield objectives.